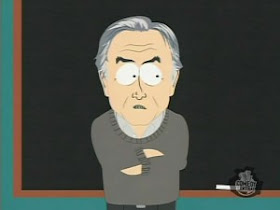 Thanks to Beetle for linking us to Richard Dawkins' advice to his then ten year old daughter. I call it foolish because any advice that is self-referentially defeating is foolish.

"Something that you learn by direct seeing (or hearing or feeling...) is called an observation.

Apparently this is always bad, according to Dawkins.

Really? Better tell the courts that they can't rely on expert testimony anymore because that's "authority" and thus not a good reason to believe anything. And how many undergraduates are listening to the authority of their professors? We must call an end to that! And how many people will make picnic plans for tomorrow based on what the meteorologist says today? Agh!

Now for some more self-referential defeat: what role is Dick Dawkins playing in this letter to his child? That of an authority. So according to Dawkins' own advice his daughter better not listen to him. She better seek validation for this disavowal of authority from her five senses because that's the only evidence that matters. Yeah, except that even that is rooted in her father's "expert" testimony that the only evidence worth having traces to the five senses.

So how did Dawkins come to know all that to begin with? Revelation?

As for "tradition", does Dawkins realize that he is inculcating his daughter in an empiricist, humanist, skeptical tradition which dates back centuries?

Dawkins advises his daughter that "People sometimes say that you must believe in feelings deep inside, otherwise you'd never be confident of things like 'My wife loves me'. But this is a bad argument."

Why is it a bad argument? Because such claims do not have empirical evidence which, according to the authority and tradition of Dick Dawkins, is the only kind of evidence worth having.

What about a moral claim like "Raping women is evil"? The layperson's affirmation of this proposition as necessarily true is linked essentially to some pretty basic "inside" feelings that rape is inherently evil. But that, according to Dawkins, is no kind of evidence at all. The only evidence that counts is "outside evidence" from the five senses. Right-o. So we are supposed to evacuate ourselves of innate moral knowledge based on an arbitrary, self-refuting empricist principle uttered by, of all things, an evolutionary biologist? Why? Because he speaks with a clipped English accept?

Next, Dawkins tells his daughter: "Belief that there is a god or gods, belief in Heaven, belief that Mary never died, belief that Jesus never had a human father, belief that prayers are answered, belief that wine turns into blood – not one of these beliefs is backed up by any good evidence."

Finally, Dawkins writes: "next time somebody tells you that something is true, why not say to them: 'What kind of evidence is there for that?' And if they can't give you a good answer, I hope you'll think very carefully before you believe a word they say."

While I disagree with virtually all of Dawkins' statements, I am sympathetic with this one. Indeed, I can only hope Dawkins' daughter heeded this one piece of advice by asking for some evidence for the litany of self-refuting pap her dad wrote to her.