May 19 has been recognized by the Greek parliament as the day of remembrance of the Pontian Greek Genocide by the Turks. There are various estimates of the toll. Records kept mainly by priests show a minimum 350,000 Pontian Greeks exterminated through systematic slaughter by Turkish troops and Kurdish para-militaries. Other estimates, including those of foreign missionaries, spoke of 500,000 deaths, most through deportation and forced marches into the Anatolian desert interior. Thriving Greek cities like Pafra, Samsous, Kerasous, and Trapezous, at the heart of Pontian Hellenism on the coast of the Black Sea, endured recurring massacres and deportations that eventually destroyed their Greek population.

The opening bell of the genocide came with the order in 1914 for all Pontian men between the ages of 18 and 50 to report for military duty. Those who “refused” or “failed” to appear, the order provided, were to be summarily shot. The immediate result of this firman (decree) was the murder of thousands of the more prominent Pontians, whose name appeared on lists of “undesirables” already prepared by the Young Turk regime.

Added thousands ended up in the notorious Labor Battalions (amele taburu). In a precursor of what was to become a favorite practice in Hitler’s extermination camps, Pontian men were driven from their homes into the wilderness to perform hard labor and expire from exhaustion, thirst, and disease. German advisors of the Turkish regime (what a surprise!) suggested that Pontian populations be forced into internal exile. This “advise” led directly to the emptying of hundreds of Pontian villages and the forced march of women, children, and old people to nowhere. The details of this systematic slaughter of the Pontians by the Turks were dutifully recorded by both German and Austrian diplomats.

The Pontians, unlike Greeks elsewhere in Asia Minor, did try to organize armed resistance against their butchers. Pontian guerrilla bands had appeared in the mountains of Santa as early as 1916. Brave leaders, like Capitan Stylianos Kosmidis, even hoisted the flag of independent Pontus in the hope of help from Greece and Russia (which never arrived). But the struggle was unequal. The Turkish army, assisted by the blood-thirsty Tsets, cuthroats of mostly Kurdish extraction, attacked and destroyed undefended Pontian villages in revenge.

On May 19, 1919, chief butcher Kemal himself disembarked at Samsous to begin organizing the final phase of the Pontian genocide. Assisted by his German advisers, and surrounded by his own band of killers — monsters like Topal Osman, Refet Bey, Ismet Inonu, and Talaat Pasha — the founder of “modern” Turkey applied himself to the destruction of the Pontian Greeks. With the Greek army engaged in Anatolia, a new wave of deportations, mass killings, and “preventative” executions destroyed the remnants of Pontian Hellenism. The plan worked with deadly precision. In the Amasia province alone, with a pre-war population of some 180,000, records show a final tally of 134,000 people liquidated.

The memory of the Pontian Genocide is dedicated to all those in Europe and the U.S. who shamelessly advocate admitting Turkey into the EU and describe it as a “democracy.” They are all blind as they are shameless. 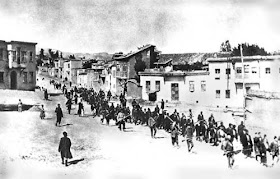 AUSTRIAN AND GERMAN ARCHIVES REVEAL THE CRIME
24 July 1909 German Ambassador in Athens Wangenheim to Chancellor Bulow quoting Turkish Prime Minister Sefker Pasha: “The Turks have decided upon a war of extermination against their Christian subjects.”
26 July 1909 Sefker Pasha visited Patriarch Ioakeim III and tells him: “we will cut off your heads, we will make you disappear. It is either you or us who will survive.”
14 May 1914 Official document from Talaat Bey Minister of the Interior to Prefect of Smyrna: The Greeks, who are Ottoman subjects, and form the majority of inhabitants in your district, take advantage of the circumstances in order to provoke a revolutionary current, favourable to the intervention of the Great Powers. Consequently, it is urgently necessary that the Greeks occupying the coast-line of Asia Minor be compelled to evacuate their villages and install themselves in the vilayets of Erzerum and Chaldea. If they should refuse to be transported to the appointed places, kindly give instructions to our Moslem brothers, so that they shall induce the Greeks, through excesses of all sorts, to leave their native places of their own accord. Do not forget to obtain, in such cases, from the emigrants certificates stating that they leave their homes on their own initiative, so that we shall not have political complications ensuing from their displacement.
31 July 1915 German priest J. Lepsius: “The anti-Greek and anti-Armenian persecutions are two phases of one programme – the extermination of the Christian element from Turkey.
16 July 1916 German Consul Kuchhoff from Amisos to Berlin: “The entire Greek population of Sinope and the coastal region of the county of Kastanome has been exiled. Exile and extermination in Turkish are the same, for whoever is not murdered, will die from hunger or illness.”
30 November 1916 Austrian consul at Amisos Kwiatkowski to Austria Foreign Minister Baron Burian: “on 26 November Rafet Bey told me: “we must finish off the Greeks as we did with the Armenians . . . on 28 November. Rafet Bey told me: “today I sent squads to the interior to kill every Greek on sight.” I fear for the elimination of the entire Greek population and a repeat of what occurred last year” (meaning the Armenian genocide).
13 December 1916 German Ambassador Kuhlman to Chancellor Hollweg in Berlin: “Consuls Bergfeld in Samsun and Schede in Kerasun report of displacement of local population and murders. Prisoners are not kept. Villages reduced to ashes. Greek refugee families consisting mostly of women and children being marched from the coasts to Sebasteia. The need is great.”
19 December 1916 Austrian Ambassador to Turkey Pallavicini to Vienna lists the villages in the region of Amisos that were being burnt to the ground and their inhabitants raped, murdered or dispersed.
20 January 1917 Austrian Ambassador Pallavicini: “the situation for the displaced is desperate. Death awaits them all. I spoke to the Grand Vizier and told him that it would be sad if the persecution of the Greek element took the same scope and dimension as the Armenia persecution. The Grand Vizier promised that he would influence Talaat Bey and Emver Pasha.”
31 January 1917 Austrian Chancellor Hollweg’s report: “. . . the indications are that the Turks plan to eliminate the Greek element as enemies of the state, as they did earlier with the Armenians. The strategy implemented by the Turks is of displacing people to the interior without taking measures for their survival by exposing them to death, hunger and illness. The abandoned homes are then looted and burnt or destroyed. Whatever was done to the Armenians is being repeated with the Greeks.
Thus, by government decree 1,500,000 Armenians and 300,000 Pontian Greeks were annihilated through exile, starvation, cold, illness, slaughter, murder, gallows, axe, and fire. Those who survived fled never to return. The Pontians now lie scattered all over the world as a result of the genocide and their unique history, language (the dialect is a valuable link between ancient and modern Greek), and culture are endangered and face extinction.
A double crime was committed – genocide and the uprooting of a people from their ancestral homelands of three millenia. The Christian nations were not only witnesses to this horrible and monstrous crime, which remains unpunished, but for reasons of political expediency and self interest have, by their silence, pardoned the criminal. The Ottoman and Kemalist Turks were responsible for the genocide of the Pontian people, the most heinous of all crimes according to international law. The international community must recognise this crime.
Source