Has Paganism Invaded An Orthodox Church? 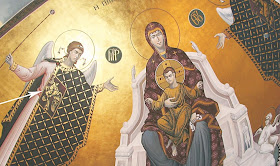 In late January and early February of 2007 much commotion broke out over the iconography in the Church of "Panagia Axion Esti" in Axioupoli of Kilkis.

Originally the focus of the media was on just a few icons that caused an uproar, such as Lenin cutting with scissors the beard of St. Luke of Simferopol, a portrait of atheist writer Kostas Varnalis, and a portrait of the neo-pagan Angelos Sikelianos who envisioned the prevalence of all religions in Greece. Later it was observed that there were many more controversial images in this church which are nothing less than occultic and pagan symbols.

If Orthodox iconography is an expression of the teachings of the Church through shapes and colors that guides the people of God to a deeper liturgical experience, then naturally such symbolism and depictions should be unacceptable.

Particular attention was given to the depiction of the Platytera icon over the sanctuary where the Virgin Mary is depicted with one angel on her left and another on her right. On the mantiya of the left angel there is a questionable depiction. The depiction hearkens back to ancient Greek mythology. It depicts Ganymede, son of Tros of Dardania and of Callirrhoe. Homer describes Ganymede as the most beautiful of mortals, who was abducted by Zeus to be his cupbearer and have sexual relations with him, and he was rewarded for this by becoming the constellation Aquarius. In poetry he is a symbol of homosexual love and even paedophilia with his ideal effeminate male beauty. Even the Sistine Chapel has a painting of Ganymede being snapped up by an eagle, a symbol of Zeus, and this is titled "The Rape of Ganymede". 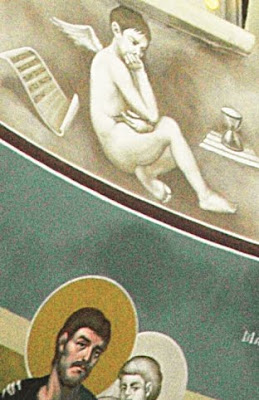 Such pagan stories were condemned by the Church Fathers. Athanasius the Great, in his book Against the Greeks, severely criticizes how the ancients made gods out of their passions in order to deify and worship their pleasures and desires. He specifically mentions the story of Ganymede who was abducted by Zeus and made into a god in the sky to deify his lewdness. John Chrysostom is not any less harsh in condemning such perversion, where in his Homily on Psalm 113 he reproaches all pagan images depicting lewdness and prostitution, and even brings up the example of Ganymede and the eagle. According to Chrysostom, this image showed the extent of the depravity reached by the people of the time.

How then did this image enter an Orthodox church in Greece? If iconography is supposed to be didactic and spiritual, what are we to make of this image in light of pagan mythology and the writings of the Church Fathers? What is more shocking however is that upon close observation we can see the naked Ganymede, who was known as the god of hunters, holding a cross in his hand! And this is depicted in the most sacred area of the church! Furthermore Constanse Cumbey says in The Aquarian Conspiracy that the cross is an ancient Egyptian symbol of fertility and transmigration (reincarnation). Could there be a connection between this fertility symbol being held by a deified symbol of homosexuality and paedophilia? For people involved in the New Age Movement, the cross merely symbolizes longevity, health, wisdom, peace and prosperity. Yet in Satanism the cross is a symbol of sex and fertility.

When these accusations were brought forward, the iconographer of the church in Kilkis gave the following response in summary.

First, he mentions that in the church he painted over 250 depictions in an area of 1,500 square meters. Out of these there were complaints of about ten depictions which were cut off from the context of the greater framework and misinterpreted.

Second, he mentions that the Metropolis of Goumenissa allowed the use of images from this church to be used in brochures, websites and several books. Nonetheless negative feedback has never presented itself until critics outside the Metropolis criticized the iconography in a sensationalistic fashion. Furthermore the work of painting the church, which took about seven years, was done with the supervision of priests and in a spirit of dialogue and freedom. He says: "The spiritual project managers did not want to impose at the outset a stranglehold, recognizing that the icon painter serves a functional art according to his charisma. The stylistic assimilation of my style draws from all the iconographic traditions." Then he brings up the minutes of the Seventh Ecumenical Council, which he says endorses uniformity in Faith, not necessarily uniformity in the expression and form of it through the icons.

Third, he explains the depiction of the man on the eagle on the mantiya of the Archangel Gabriel as follows. He says the man on the eagle is an early Christian representation of man rising up to God. Apotheosis, he says, was depicted by the ancients in three ways: 1. through an eagle, vulture or the winged goddess Nike; 2. a man on a quadriga (like Constantine the Great); or 3. through a ladder (like Jacob's Ladder). He further argues that the myth of Ganymede does not speak of paedophilia according to certain scholars. Thus the image should be seen as the Lord raising man to heaven through His incarnation and deifying us. 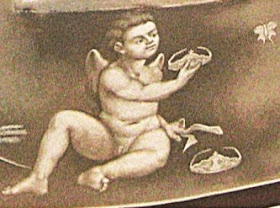 Fourth, the iconographer mentions that pagan themes were often used by Byzantines in iconography to depict Christian subjects. The mythical aquatic creatures in the Theophany icon is one example of this. Hades being trampled by Christ in the Resurrection icon is another.

Fifth, ancient pagan philosophers can be observed to be depicted in many churches and monasteries throughout Greece.

Sixth, the depictions of the zodiac signs in the dome show that Christ is the Lord of all creation, and have nothing to do with astrology. Similar depictions are also seen in many ancient Byzantine churches. One example is the Monastery of Lesnovo in 1346/7. It is depicted a few times in Crete as well. Photios Kontoglou even writes about how the zodiac signs are to be depicted by iconographers. 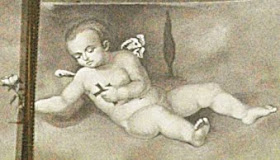 Seventh, the iconographer argues the same about his depictions of the Wheel of Life and the personifications of the virtues and passions. He cites the ancient character of their use by Christians in the Byzantine era and cites examples of churches and monasteries where they are depicted. That he tries to transform these pagan images into Christian ones is seen in the depiction of the god Eros, who holds wedding crowns in his hands to show that erotic love should only be within the blessing of holy matrimony. As for the Wheel of Life, this merely portrays the cycle of the life of man from birth to death, coupled with the ravages of time and the futility of worldly pleasures.

Eighth, he addresses the depiction of historical persons in churches, among whom he depicted Makriyiannis, Papadiamantis, Kontoglou and Pavlos Melas. He says he did this for purely historical reasons for their contribution to the Church. Kontoglou allows for these also. He notes that none of these have halos or bear the name "Saint". He argues that many examples of older churches support the depiction of historical persons and events, most popularly being the mosaic of Justinian and Theodora in San Vitale of Ravenna. Even St. Neophytos was depicted while he was alive. 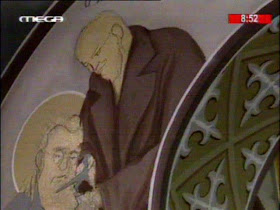 In conclusion, the iconographer, known as K. Vafiadis, argues that the sensationalistic arguments of the critics are unfounded and they should have consulted him before they went to the media. He also argues that religious painters should be given the freedom and responsibility to assimilate and continue the tradition of iconography as handed down to them.

To what extent therefore are pagan images to be shown in iconography? Certainly there are valid arguments on both sides, but the debate remains open. The Church of Panagia Axion Esti in Kilkis is an excellent place to start this debate.

This article was adopted from these links: