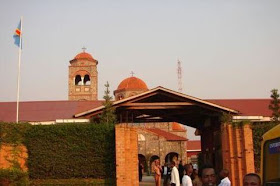 On a continent where only few can have access to higher education, a tuition free university would be a dream. Thanks to the charity action of the Greek Orthodox Diocese of Central Africa four years ago, a university like this was created in the Democratic Republic of Congo, in Kinshasa (former Zaire). For the moment, there is only one department, the Orthodox Theological School, but soon three more schools are going to be included: Agriculture, Informatics and Medicine. There are 63 students right now in the university coming from different countries (Rwanda, Congo-Brazzaville and others).

The foundation of a theological academy was the dream of late Archbishop of Central Africa Timotheos, but came true when current Archbishop Ignatios took over. The works started in 2005 in a suburb of the capital, at a land granted to the Church by President of the Greek Community Mr. Kon. Sophiadis. Two years later, on 23/9/2007, Patriarch of Alexadria and all Africa Mr. Theodoros inaugurated the Theological School. Education Minister of the country Masuga Rugamika, gave Mr. Ignatios the ministerial decision for the operation of the university “Saint Athanasius the Athonite” and Greek Ambassador in Congo Mr. Al. Katranis marked the importance of the Orthodox university. The building of the university, with architectural characteristics of a monastery building (2,600m2) was constructed in the hill Kimbondo, thanks to the donations of missionary societies, friends of the mission from Greece, oragnizations, pilgrims and hundreds of anonymous individuals. To the question “Which are the prospects of those students after their studies in Theology?” professor Dimitris Vamvakas explains: “Some of them work in churches, others work as teachers in the Orthodox primary and high schools of the French-speaking area. Above all, they are going to be the scientists who will support the missionary work of the Orthodox Church among the peoples of the Black Continent”. 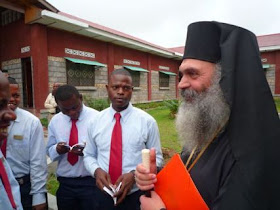 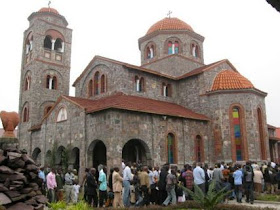 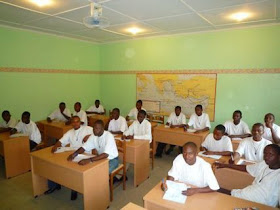