Discovery of the Skull of Saint Nicholas of Metsovo 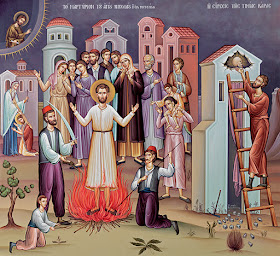 St. Nicholas Basdanis (Feast Day - May 17 and November 28)
Saint Nicholas Basdanis the New Martyr of Metsovo, when urged by the Turks to deny his faith in Christ and accept Islam, responded: "I was born a Christian, I am a Christian, and a Christian I wish to die. Therefore, I will never deny my faith, no matter how many martyrdoms I am subjected to." Unable to compel him, the Turks had St. Nicholas thrown into the flames, while he glorified God. He surrendered his spirit on May 17, 1617.

A potter who was moved by piety went by night to the place to find the holy relics of St. Nicholas. He saw Turks keeping vigil guarding the relics, gave them a sum of money, and took the sacred head of the Martyr, which was slightly damaged by the fire. He returned to his home and concealed the skull in a place inside the wall for fear of the Turks. Only the members of his household were aware of the secret. With the passage of time the potter died and the precious head remained hidden. Eventually the potter's house was purchased by another Christian named Melandros. 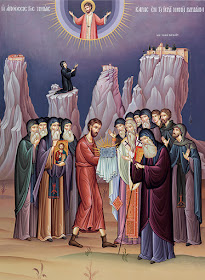 Every year in the evening of the day when the Saint accomplished his martyrdom, Melandros would notice a bright light emanating from a certain part of the wall. He was amazed at this wonder. He received a divine revelation in his sleep, disclosing that at the place the light appeared was hidden the holy skull of Nicholas the Martyr. Wherefore, Melandros opened the wall and discovered the relic. Aware of his unworthiness to possess such a treasure in his house, he went to the Monastery of Barlaam at Meteora where his brother was a monk and offered it in their parents' memory. There the head of the holy New Martyr Nicholas, which brings about countless miracles, may be found to this day. We wish to report a few so that you may believe the others.

Once a plague struck Trikala and many died each day. Yet only by the presence and consolation of the holy relic did the plague quickly cease. Similarly, in the village of Distata the inhabitants suffered the same scourge, but they were also delivered by his holy head. Even those of Kalarritai were visited by sickness; and they too were immediately saved by its presence. By the grace of the holy skull locusts were destroyed throughout the countryside and all the fruit preserved unharmed. Both the Christians and the Turks were ecstatic about this miracle, for it occured not only once or twice but many times, even to this day. Not only the above mentioned type of healings took place, but incurable diseases were wondrously cured in every place that he was invited. Indeed, this and many more occurred.

The martyric relics are to be found at several location, one of which is Ioannina, where there is found one-half of the palm of the Saint's hand. Through St. Nicholas' intercessions, may we be rescued from every affliction and receive every necessity. Amen. 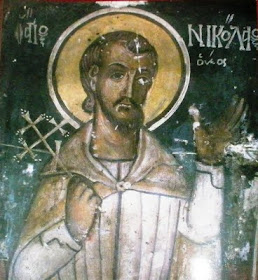 HYMN OF PRAISE: SAINT NICHOLAS THE NEOMARTYR
By St. Nikolai Velimirovich
Nicholas the martyr, for Christ suffered
And by painful patience, overcame the devil;
And to deny his Savior, the hero did not want,
But glorified God as long as he had a voice;
And in his heart, he glorified Him when his voice gave out
And for greater sufferings, from his enemies begged.
Cruel as wolves, the Turks beat him,
Every inhuman suffering, they put him through.
And finally, his holy head, they beheaded.
Into the green grass, the head rolled,
The saint's head, with light radiated;
And a Christian in silk, wraps this head
And in church he brought it, for many, to be a remedy,
The disfigured to heal, the blind and the insane.
On all sides, God punished the unbelievers,
And the faithful Nicholas, eternally glorified. 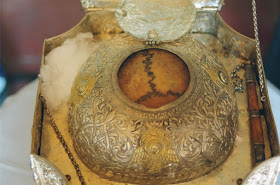 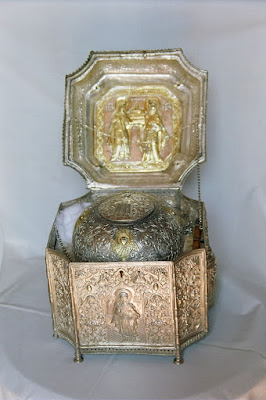 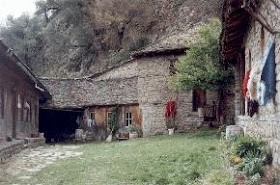 Church of St. Nicholas of Metsovo in Metsovo 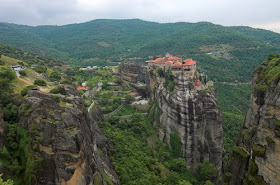