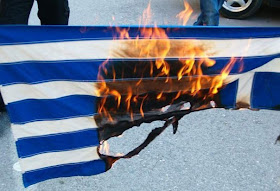 His Eminence Archbishop Demetrios has proclaimed May 15, 2011 as "AHEPA Sunday" in the Greek Orthodox Archdiocese of America.

"The connection of the Sunday of the Paralytic and AHEPA Sunday is very appropriate, as it offers to us a substantive and spiritual focus on the service that is offered in our communities and around the world by the AHEPA family," the archbishop stated in the encyclical.

AHEPA was founded on July 26, 1922 in response to the evils of bigotry and racism that emerged in early 20th century American society. It also helped Greek immigrants assimilate into society.

Anti-Hellenism: prejudice against or hostility towards Greeks, often rooted in hatred of their religious, cultural or ethnic background, as well as jealously and envy towards the many accomplishments of Hellenism.

The concept of Anti-Hellenism is a fairly recent one although the term has been floating around for quite some time. What can be historically accepted is that racist attacks, persecutions, genocides, and other crimes have been committed against ethnic Greeks for numerous reasons.

Modern Opponents claim that Anti-Hellenism lacks a racial and cultural basis like anti-Semitism. Instead these critics say that it appears mostly as a mispercep-tion due to geopolitics and is not a true hate movement against ethnic Greeks. To date attempts to discredit anti-Hellenism have been successful partially due to the lack of serious scholarly research in documenting acts of Anti-Hellenism.

What critics fail to understand, however, is that hate crimes have been committed towards ethnic Greeks based on racial and cultural basis throughout history. There is no logical reason why these acts of hate, past and present, can not or should not be collectively labeled ‘anti-Hellenism’.

Critics of Anti-Hellenism like to claim that unlike other kinds of racial or ethnic preju-dice that anti-Hellenism lack an official ide-ology of hate, like Nazism for Jews. How-ever, what critics seem to forget is the exis-tence of such ideologies as Macedonism, Turkism and Kemalism. Ideologies that have preached hate towards ethnic Greeks and Hellenism, resulting in physical mani-festations of violence, individual and state sponsored, against ethnic Greeks.

"White folks was in caves while we was building empires. We taught philosophy and astrology and mathematics before Socrates and them Greek homos ever got around to it."
-- Rev. Al Sharpton, cited in Democrats Do the Dumbest Things (Renaissance Books)

Examples of Anti-Hellenic Persecutions Throughout History

Hellenic Genocide (1914-1923) perpetrated by the Young Turks and Kemalists throughout the Otto-man Empire, resulting in the extermination of 1.4 to 1.7 million ethnic Greeks. Ethnic Greeks like all Christians of the Ottoman Empire were referred to as ‘Giaours’, a derogatory word meaning ‘dog’ or ‘infidel’. The events of 1914 through 1923 are a prime example of a state-sponsored act of racist based on racial and cultural basis for ethnic Greeks.

Grecheskaya Operatsiya; Greek Operation (1937-1950) perpetrated by the Soviet Union under direct order of Joseph Stalin. It is the second worse state sponsored campaign of ethnic cleansing against ethnic Greeks.

Anti-Hellenic riots of Toronto (1918) perpetrated by a mob of 20,000 Canadians, led by returning World War 1 veterans resulting in 150 people wounded, 40 businesses destroyed and 100,000 dollars worth of damage, which today would be roughly 1.25 million. One of the largest anti-Hellenic riots in the world; Canadians attacked, looted and destroyed every Greek restaurant they could find.

Anti-Hellenic riots of Omaha (1909) perpetrated by 3,000 Americans resulting in the death of one young boy and the forced migration of the entire ethnic Greek population. The Omaha riots were a direct result of an ethnic prejudice against ethnic Greeks.

Like African-Americans, Greek-Americans would suffer personal and economic intimida-tion perpetrated against them by the Ku Klux Klan. A forgotten moment in American his-tory, these violent acts of discrimination against ethnic Greeks were widespread in the 1920s, as the KKK viewed ethnic Greeks as racially inferior. Attacks against ethnic Greeks occurred throughout the United States in places like Georgia, Nebraska, Utah, Florida, and Indiana.

Ethnic Greek-owned businesses were often boycotted by the Klan financially ruining many ethnic Greeks. These boycotts were of-ten supported with threats of violence against anyone entering or leaving Greek businesses. In one incident, an ethnic Greek was flogged in Palatka, Florida for dating a ‘white’ woman. Ethnic Greeks were often called, ‘Dirty Greeks’ and ‘unfit for citizenship’ by Americans. It is this belief of racial inferior that still persists today making many ignorantly believe that ethnic Greeks are not white, when they are.

Macedonism is an ideology of hate that seeks to de-Hellenize the history, culture, and identity of Macedonia into a separate Slavic inspired identity with warped illu-sions of an unbroken racial continuity between them and the ancient Macedonians.

Turkism / Pan-Turkism is the idea of a po-litical union of all Turkic-Speaking peo-ple. The ideology would be adopted by the Young Turk movement and become the official ideology of the Ottoman Em-pire. Its racist and chauvinistic principles would be a guiding force behind the plan-ning and execution of the Hellenic, Armenian, and Assyrian Genocides.