The Trickery of Sai Baba 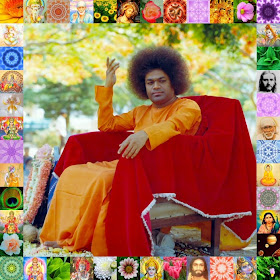 Sathya Sai Baba, the famous Hindu Guru and demi-god, died at the age of 84 yesterday (read here). He is said to have performed many miracles in his lifetime, yet they were clearly magic tricks by which he deceived many people. Much can be read at Sathya Sai Baba Deceptions Exposed. One of his predictions for example was that he would die at the age of 90, so with six years short of his prophecy his "early" death throws a major death blow to his credibility.

He vanished the Taj Mahal. He made a train full of people disappear. He can turn a baby elephant into a horse. He performs to full houses more than 400 times a year, travels with a crew of 75, carries 48 tons of equipment, an elaborate laser lighting system and costumes galore. He has performed in front of royalty, presidents and prime ministers. No, he's not David Copperfield. He is P.C. Sorcar Jr., billed as the living legend of Indian magic. Even though he has garnered fame and fortune, Sorcar is not the best known magician in India. That distinction goes to Swami Sai Baba. But the Swami is not regarded as a magician. Far from it. He is revered as a miracle worker, a healer, an embodiment of divinity who has come down to Earth. To his followers, he is a "godman."

Baba has millions of followers in more than 100 countries who regularly gather at Sai Baba centres to pray, sing, meditate and work toward improving the human condition. And let's give credit where credit is due. Numerous schools, hospitals and safe drinking water systems have been built under the Swami's guidance to benefit the poor.

But don't count P.C. Sorcar among the guru's fans. He calls Baba a charlatan whose miracles amount to no more than common conjuring tricks, readily duplicated by any amateur magician. He's right. The production of "holy ash" from an apparently empty hand, the sudden appearance of a watch or necklace and the coughing up of a golden egg are all standard conjuring tricks, readily learned by any youngster attracted to magic as a hobby.

There is no doubt the miracles the Swami performs are magic tricks. Back in the 1940s, when he burst upon the scene, there were no video recorders, so all he had to do was fool a live audience. But now, his public appearances are videoed by amateurs and professionals, and you can't fool the camera. Stop action shots clearly show the guru palming compressed ash pellets before sprinkling holy ash on his admirers and "stealing" the necklaces and watches from various hiding places before they make their miraculous appearance. The rich, capable of giving donations, get the jewelry, the poor get the ashes.

Magicians get really irritated when their art is misused. Sorcar is no exception and has repeatedly challenged Sai Baba to produce his miracles under controlled conditions. Not only has that challenge not been met, the guru has even refused to meet with the magician. Sorcar finally resorted to attending one of the Swami's "performances" incognito and when Baba produced a sweet known as a sandesh, he stood up and oneupped him by materializing a rasgulla, an Indian cheese ball. At this point the Swami began to shout and had the magician forcefully removed.

Why should anyone object to the Swami's use of magic tricks in support of his roleplaying as a god? After all, he and his devotees have done a lot of good.

But what about the unfortunate people who have been disappointed when the godman was unable to heal them? Even worse, how many young men have been victimized because the guru's magic tricks convinced them that he is a god, and that therefore they should unquestioningly do his bidding?

Allegations of homosexual abuse are way too numerous to dispute, with many accounts of the holy man performing unholy feats such as rubbing followers' genitalia with oil under the guise of a "spiritual experience." Former worshippers have also come forth to describe the decidedly ungodly acts they were asked to perform during "private interviews" with the deity.

While Sai Baba is the most famous godman, there is no shortage of self-proclaimed divine beings prowling the Indian countryside, performing miracles in return for donations. Godliness is a growing, lucrative business. Aspiring gods can head to the southern Indian state of Kerala where they can enrol in schools that specialize in teaching the tricks of the trade. Here they learn how to produce holy ash, how to materialize sweets from thin air (apparently an absolute requirement for gods), how to make jewelry magically appear and how to perform the "Indian water trick," a particular favourite.

A "lota bowl" is a traditional Asian container used to dispense water in ritual purification ceremonies. But a guru who has graduated from god school can turn the bowl upside down, empty it, and within seconds show it to be full of water again. Once more it is emptied, only to be magically filled again. Surely anyone who can produce such holy water out of nowhere can also heal the sick, and is well-deserving of donations! Needless to say, the only miracle here is in the form of some clever engineering that allows the jug to be refilled with water from a hidden compartment.

An even more impressive effect is to have a coconut erupt in flames after pouring "holy" water on it. The message is that an ailing person's illness has been transferred to the coconut for destruction.

Actually, hidden in the coconut fibres is a small piece of potassium that reacts with water to form hydrogen gas, along with enough heat to ignite the hydrogen and the coconut. Impressive!

Chemically astute gurus can even start fires by telepathy! All they need do is pour some ghee (clarified butter) on sawdust and glare at it from a distance until it bursts into flames. A neat demo to be sure, one I do in the lecture room without any need for divine intervention. But I do need some potassium permanganate hidden in the sawdust to react with the glycerol masquerading as ghee.

I doubt, however, that the minions who worship at the feet of Sai Baba (now in very poor health, apparently unable to heal himself) will ever believe that their godman is but a simple conjuror. And not a very good one at that. His best trick actually is to make rational thinking vanish.
John at 9:25:00 AM
Share
‹
›
Home
View web version