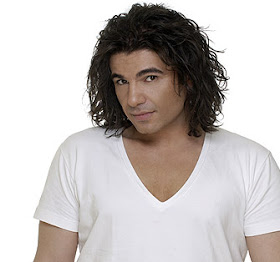 Nikos Kourkoulis is among the most well-known and beloved musicians in Greece. On 6 December 2006 he spoke on Greek television station ANT1 of the following incident which occurred to him in 2002.

In 2002 Nikos was diagnosed with pancreatic cancer. After several tests, this diagnosis was confirmed. His mother told him not to worry, that all would turn out well for him.

During the period of Great Lent he finished the program at the center where he was appearing, and he presented all his friends and colleagues with gifts and gave his final wishes, as his cancer was rapidly progressing.

His friends and his uncle urged him to go to Mount Athos. This sounded like a good idea to him, as he had desired to travel to the Holy Mountain for years. The day before he went he decided to have another test, but did not get the results as he knew they would be the same. He had also decided that upon his return he would travel to America to speak with a physician who was a pancreatic specialist.

He departed then from Ouranoupolis on a small boat and landed in Daphne on Mount Athos. It was Holy Week and the boat was full of visitors and pilgrims. Despite this, there was one empty chair in which his friends urged him to sit. Next to him sat a gentleman of about 50 years of age who turned to Nikos and asked him: "Are you Kourkoulis? You know, I don't really know you because I am from America, but my daughter listens to you and likes your music. Can we take a picture together so that I can give it to her, as it would make her happy?" The picture was taken and then they began a conversation. Nikos mentioned how he desired to go to America, not as a tourist, but in search of a physician who could possibly help him with his health problems. He then mentioned the physicians name, and the gentleman from America was astonished.

What astonished the man was that he was the right hand man of the doctor Nikos had mentioned, and moreover the doctor in question was sitting right next to him. Having recovered from the surprise he talked with the doctor and exchanged cards for subsequent communication.

They arrived at the Skete of Saint Anna for the vigil of Great Friday. At one point an elder of the Skete named Fr. Silas approached Nikos and said: "Come with me, now that the large crowd has left, that you can venerate the belt of Saint Anna." He didn't know Fr. Silas, but he followed him anyway. When they reached the holy belt Nikos knelt and prayed. After kneeling for about one or two minutes he began to feel a great pressure on him that drove him to the floor. It made him faint and he was out for about twenty minutes. When he recovered he began to cry for what he felt. After about an hour of weeping he went to a room where he rested the entire next day.

After Pascha he returned to the city and visited the doctor where another surprise awaited him. The doctor told him that in the new tests they had taken, no trace of cancer could be seen. There was not even an indication that he ever had cancer.

It should be noted that during the entire period after he was diagnosed with cancer, he never took a drug or went through any chemotherapy to aid in his recovery.

Hear his testimony in the video below (in Greek):