Miracle of the Holy Light of Jerusalem 2011 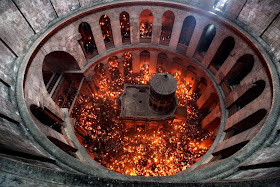 The small doorway to the traditional site of Jesus' tomb cracked open to reveal a bright flame and tens of thousands of worshippers cheered ecstatically, marking the pinnacle of Easter Week's holy fire ceremony in the Church of the Holy Sepulcher.

The annual ritual has been practiced for at least the last 1,200 years on the day before Easter, which celebrates Jesus' resurrection.

Worshippers of various Orthodox Christian sects packed into the Jerusalem church — Christianity's most sacred shrine and revered as the site where Jesus was crucified, buried and resurrected. In the ceremony, a flame believed to be miraculously lit emanates from the tomb.

Hours before the ceremony, local Christians and pilgrims from around the world snaked through the narrow alleyways of Jerusalem's old city and filled the small courtyard outside the church. About a thousand Israeli police officers processed the crowds through police barricades that filtered access to the church's only entrance.

People crammed against each other in the dimly lit, cavernous church, and police broke up scuffles. One middle-aged American woman fainted, but she remained standing because people were pressed up against her in the densely packed crowd.

Despite the suffocating crowds, the throngs waited in anticipation for the ceremony to begin, clutching bundles of 33 slim candles signifying the years of Jesus' life.

Adorned with a golden crown encrusted with jewels and religious icons, the Greek Orthodox Patriarch of Jerusalem, Theofilos III, entered the Edicule, the small chamber at the core of the church marking the site of Jesus' tomb. Armenian clergymen entered as well, and the door was sealed, guarded by clergymen and an Israeli policeman. 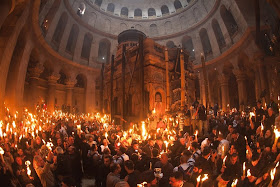 Then, the door was opened to reveal candles lit with the holy fire — said to be miraculously lit and interpreted as a message to the faithful from the heavens. The precise details of the flame's source are a closely guarded secret.

The flame was quickly passed on from one bunch of candles to another, and soon the dark church was filled with worshippers holding flickering torches and waving it around their faces. Bells rang and people cheered.

"Christos has risen. I feel amazing," said a Russian Orthodox pilgrim from San Francisco who identified himself only as Igor. "It came from God, from the sky."

Police spokesman Shmuel Ben Rubi said around a thousand police officers were deployed to direct foot traffic and keep the peace. He estimated tens of thousands of worshippers were in the church.

Asaf Abras, spokesman for Jerusalem's firefighting services, said about 10 firefighters with mobile units were stationed around the church in case of emergency.

Israeli officials have been worried since the late 1990s that a fire could erupt from the church during the ritual. In 1834, pilgrims in the church panicked, a stampede ensued, and several hundred people were crushed or suffocated to death. 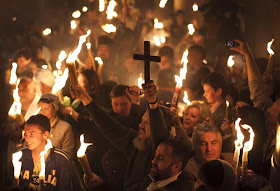 But the six Christian sects that stake claim to different sections of the church have been reluctant to build an emergency exit or a fire escape. The sects zealously guard their portions of the church and brawls have erupted in recent years when clergymen of one sect encroach on another section, even when only sweeping the floor. None of the sects wants to give up an inch of precious real estate in the church to construct a second exit.

After the holy fire ceremony, the flame was immediately taken from the church and past an Israeli military barrier into the Palestinian Authority-controlled city of Bethlehem where it was received at the Church of the Nativity, the traditional site of Jesus' birthplace.

Palestinian Prime Minister Salaam Fayyad attended another holy fire ceremony in a central square in Ramallah, the seat of his government in the West Bank.

In the Gaza Strip, about fifty Christian worshippers attended a mass in one of Gaza's two churches.