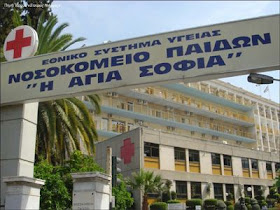 The seven-year-old boy who was seriously injured by a flare on Easter Saturday has died in an Athens hospital, doctors said.

The boy, who was not named, suffered serious head injuries when the flare exploded in the courtyard* of the Agios Georgios church in Drosia, near Halkida on Evia.

He was being treated at Agia Sofia Hospital, where he died on Friday morning.

A 25-year-old man has been arrested for allegedly firing the marine flare.

It is traditional in Greece for worshippers to set off fireworks and bangers as part of celebrations to mark the resurrection of Christ.

* The boy was named Christos and the firework was thrown by a 26 year old into the courtyard of the church, which hit the boy in the eye.
John at 9:55:00 AM
Share
‹
›
Home
View web version