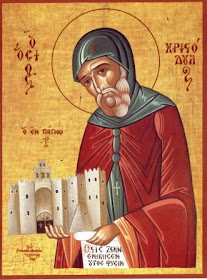 
During the reign of Emperor Domition (81-96 AD) St. John the Theologian was exiled to the island of Patmos for casting down the temple and idols at Ephesus, and during his sojourn there he succeeded in converting almost the entire island to Christ. When Christianity became the state religion in the fifth century, the elaborate temple to Diana was pulled down, and in its place a magnificent basilica was dedicated to St. John. Many churches were subsequently built throughout the island. For six hundred years after Christ, the island's towns and commercial endeavors prospered until the island was despoiled by Arab pirates and other invaders. The beautiful basilica of St. John was destroyed and Patmos left uninhabited.

It was God's providence, however, not to leave the holy island deserted, and He chose a righteous abbot from Asia Minor named Christodoulos to be the instrument of its revival. Repeated Ottoman-Arab invasions had already forced the abbot into exile more than once, and by the late eleventh century, the abbot had left a trail of monasteries and libraries in his wake.

Born in Bythynia, in Asia Minor, Christodoulos, whose original name was John prior to being a monastic, first lived as a hermit on his native Mount Olympus and later in the Palestinian desert, finally returning to Asia Minor to serve as abbot of the Mount Lamos Monastery near Caria. In 1085, the monks of Mt. Lamos fled from the Turks and the abbot took refuge in the island of Kos, not far from Patmos, where he founded a monastery dedicated to the Mother of God.

Abbot Christodoulos soon made the acquaintance of Fr. Arsenios, an ascetic hermit who was the son of wealthy Kosian landowners and heir to their estate. Arsenios became the abbot's spiritual son, and together they dreamt of reestablishing monastic life on Patmos. Father Christodoulos later wrote of his disciple: "He was a benevolent and pious man, of noble birth and a native of this land, held in high esteem by all islanders, of mild manners, with integrity of character, morally upright, a monk by devotion, called Arsenios, surnamed Skinouris, wholeheartedly given to our service."

In the year 1088, after founding a second monastery on the island of Leros (dedicated to St. John the Theologian), Fr. Christodoulos presented himself at the court of the Emperor Alexios I Komnenos in Byzantium, where he unfolded his plan to reinhabit Patmos with monastics. The emperor granted his request, and he was given sovereignty over the entire island in exchange for lucrative holdings on Kos that were tied to Arsenios' inheritance. In August of that same year, Fr. Christodoulos took possession of the "deserted and uninhabited island of Patmos".

He is described at this time by a contemporary as "a forceful hermit, with profound knowledge of people and the world he lived in, a pious monk, and an able abbot." Although born a peasant, Fr. Christodoulos had a passionate love of books. He was a self-taught man who had benefited much from his reading, acquiring both rock-like faith and sound judgment. His love of learning and solid common sense are revealed in an extant copy of his plans for the monastery, where he set down detailed procedures for the copying, care and safe-keeping of the library's books. Its first donations were his won. Today, he is not only remembered as a scholar and a monastery builder, but has been given the title of "wonderworker", as a testimony to his effectual prayers.
In 1091, Fr. Christodoulos drafted plans for the building of the Monastery of Saint John the Theologian and the construction of its defensive enclosure, which he called "the fortress". On his return from Constantinople he brought masons and craftsmen with him, and they set to work. The monastery he designed still crowns the hilltop above the island's main port, over the ruins of the original fourth century Basilica of Saint John and the earlier temple dedicated to Diana.
In 1093, only two years after beginning construction, the monks were forced to flee Patmos in the face of pirate raids instigated by Emir Dzaha, and Fr. Christodoulos took refuge on Evia, where he reposed on May 16, 1093.
The monks soon returned, however, and by 1100 the Monastery of the Theologian numbered one hundred souls. Until the seventeenth century, Patmos was governed spiritually and administratively by the monastery, which provided for both the economy of the island and the defense of its inhabitants. Fr. Christodoulos had originally envisaged Patmos as a monastic enclave exclusive of women, and it was with difficulty that the craftsmen had been able to induce him to set aside a small piece of land at the far end of the peninsula where they could build a village and settle their wives while the monastery was being constructed.
Inside the katholikon of the monastery is a small chapel in the narthex dedicated to St. Christodoulos. There his relics are enshrined, having been brought back to Patmos after his death. Originally placed in a marble sarcophagus, the relics now rest in a gold and silver plated wooden chest that sits atop the sepulchre for veneration.
From Evlogeite! A Pilgrim's Guide To Greece by Mother Nectaria McLees, pp. 663-668. 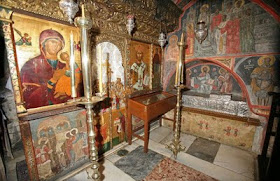 The Hermitage of Saint Christodoulos at Alykes
The entire area on the north side of the harbor of Stavros is named Alyki or Alykes. This area was always used by the monks to collect salt. The monk who supervised this job was called ‘Alykaris.’
In the Brevium in the monastery, a documentary book, it is mentioned that in 1568 “Matthew, a Cretan, who was an Alykar died” and in 1603 “on August 2, the monk Nektarios died at Alykes".
A little church honoring Saint Christodoulos is located at Alykes. It measures 5.05x2.95 meters, and is domed, with narthex and an attached cell. On the iconostasis is a miraculous icon which was found near the caves. It seems that a monk lived in the cave and among the other icons, there was one of Saint Christodoulos. Later, another monk built the little church and brought the icon from the cave and put it on the iconostasis. The icon depicts Saint Christodoulos offering the monastery of Saint John the Theologian as written in the book which he holds.
From the very old man, John Gamberakis, a farmer who worked for the monastery at Alykes (his grandfather, Dimitrios Grillakis, lived there as a farmer for the monastery 100 years ago), we learn about the monk Germanos Skopelitis who lived at Alykes for many years. Gamberakis has many memories of the priceless counsels given to him by the monk from the bottom of his heart. As he tells us, he had heard that a young girl had come to do laundry at Alykes. Suddenly she saw a sweet old man who frightened her so much that she never returned to Alykes to do laundry. It must have been Saint Christodoulos who protected the hermitage.
Source 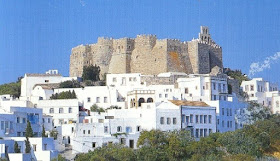 The Gardens of Saint Christodoulos
The oral tradition concerning the Gardens of Saint Christodoulos is as follows: When Saint Christodoulos was living in Patmos, he planted a garden to supply vegetables for the monks. The monks who had worked very hard building the Monastery were very tired. They refused when Saint Christodoulos asked them to dig for water. Saint Christodoulos then fell to his knees and prayed all night long for God’s intervention. His prayer was so warm that at the place where he had dug, which was in the shape of a cross, a clear, pure spring emerged. The monks then realized their bad behavior and acknowledged the Holiness of Saint Christodoulos. The garden has been kept up since the 11th century and is named the “Kipos of the Saint” The spring was covered with an arch and since then it has been called “Holy Water” or “Water of Saint” or “Water of the Holy Father”.
Today, only the foundation from the time of Saint Christodoulos remains. The upper part was reconstructed at a later date. Besides the Spring of the Saint, other springs have come up near the first one. These are still in existence from those days. Near each spring, a reservoir was built to store the extra water. Once there was a huge boulder on the side of the cliff overlooking the “Kipi” which rolled down threatening the destruction of the garden. Saint Christodoulos again prayed warmly and deeply and this prayer was able to stop the boulder and made it so secure that it remains in the same place today. This was truly another miracle.
During the times when people were more pious and believing, they would go to the boulder and lean on it for healing purposes on the same spot where Saint Christodoulos had leaned on it to stop it from rolling down to the gardens.
There is another story that once a Byzantine Princess lived in Patmos and that she had hidden a treasure near the boulder. It has never been found, or if it was found, it was never reported.
Source 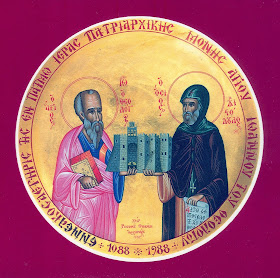 Apolytikion in the First Tone
Let us, O brethren, honour godly Christodoulos, offspring of Nicea, protector of Patmos and boast of monks. Let us venerate his relics and so receive healing of soul and body, and cry out with hymns, Glory to Him Who has strengthened you; glory to Him Who has crowned you; glory to Him Who through you works healings for all.
Kontakion in the Fourth Tone
Since we possess your relics as a holy place of healing for all our diseases and afflictions, we are redeemed and cry aloud to you, Rejoice, O Christodoulos. 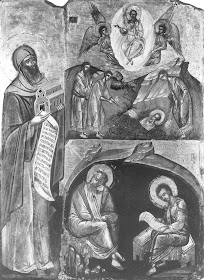