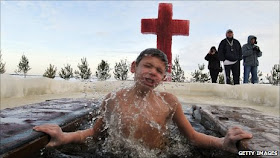 When an amateur video of a screaming, naked boy being plunged by a priest into an ice hole in Siberia appeared on the web, it caused a massive outcry in the Russian media and blogosphere.

The boy appears to be no more than five or six years old.

At first, he is seen wrapped up in a blanket, already crying, as adults in fur coats carry him towards an ice hole carved in a frozen lake or river.

He is then unwrapped and fully immersed three times into the water - obviously against his will - while an Orthodox priest conducts a baptism ceremony.

"Where did this happen? Who is the priest? Who are the parents?" wrote one blogger, stating his determination to gather information about the "sadistic" incident and make it public.

The ceremony is reported to have taken place not far from a Siberian city of Irkutsk on 19 January, the Russian Orthodox festival of Epiphany, commemorating the baptism of Jesus Christ.

Religion was frowned upon during Soviet times, but since the fall of Communism it has made a big comeback.

There is now no shortage of people of all ages, eager to fast during Lent, mark the resurrection at Easter with traditional bread, get married in church and christened in holy water.

And since Jesus Christ was baptised in January - according to the Russian Orthodox church - many regard stripping down and diving into icy water as a good way to erase their sins. 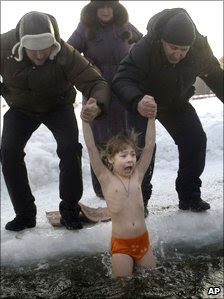 Some take their children with them, dipping newborns and older ones alike.

Not everyone, though, does it for religious reasons.

"My son was eight when I first took him to an ice hole in a river, four years ago," says Andrei Roletski, a musician living in Saint Petersburg.

Now they swim every winter weekend, carving a hole in the ice with axes.

But he never forced his son to dive into icy water - Igor actually asked his dad if he could come along.

"I myself started ice swimming five years ago, and at the same time I began getting Igor used to cold water by splashing it on his feet in the bath every night. He was fine with it," says Mr Roletski.

"Then, one day, he asked me to pour cold water over him so that he was completely wet, and a few months later, when I said I was going for a dive in January, he said he wanted to come too."

Mr Roletski says Igor enjoyed the experience and "hasn't even sneezed once for the past two years as his body has become much more resistant to cold viruses and infections".

But Irina Yefremova, a paediatrician from a Moscow Sports Medicine Centre, warns that plunging a child into an ice hole even for a few seconds could lead to all sorts of problems - from the common cold to loss of consciousness.

The heart could simply stop beating, she says.

Newborns, in particular, she explains, have an underdeveloped thermoregulation system.

"Such a great temperature change is a huge shock for the body - one minute the child is dressed, the next he or she is in icy water. It is very stressful for the system, especially for the heart."

Natalya, aged 22, was one of those who plunged into an ice hole cut in shape of a cross on the frozen Moscow River this year.

It was a last-minute decision, spurred on by a friend who showed her the Epiphany swimming page on social networking site vkontakte.ru.

"I'd never even taken a cold shower before that and I was scared a bit, but everyone was saying that the water is sacred and it will take all your sins away, so I went along," she says.

She jumped into the water feet first, going under with her head, and loved the experience - though with an air temperature of -26C she admits it was painful.

"It was like getting your body pricked by a thousand needles at once - and my head was really, really cold," she says. 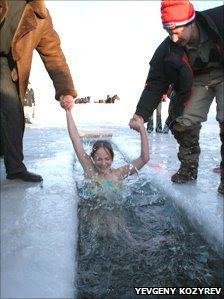 The popular belief that diving three times into an ice hole on Epiphany will erase your sins is not actually endorsed by the Orthodox Church.

And christening does not have to be done outside in the cold - or done on Epiphany at all, explains Father Yakov Krotov, an Orthodox priest from Moscow.

"Christening, while being beneficial for the soul, does not have to be harmful for the body," he says.

"And although in the ancient times Christening was done in rivers, it does not mean that nowadays Baptising someone in a church by pouring warm water over the head is somehow less beneficial," he adds.

Besides, he says, the practice of plunging into ice holes on Epiphany, is not really a centuries-old ritual. Before the October Revolution of 1917, only a few people would do it - nothing like the numbers that have taken it up since the 1990s.

"This is not going back to our traditions - no, this is just an attempt [by the masses] to create some kind of great past," he says.

And regarding the case of a young boy being forcefully christened in an ice hole somewhere in Siberia, Mr Krotov says that he does not approve of those parents - and priests - who disregard the opinion of the child who is old enough to have his or her own stance on Christening.

"It does not matter if it happens in an ice hole or in a Church, a priest cannot ever be abusive," he says.

"This is not right."