On the Revilers of Orthodox Faith and Greek History 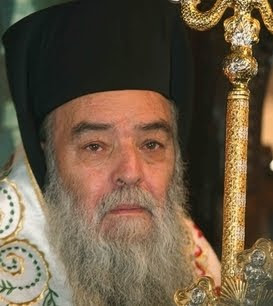 March 10, 2011
By Metropolitan Jeremiah of Gortynos
My sermon today, Christian brethren, I write with much pain, but also with great indignation about things heard lately in our country.

And of course our Church should not remain indifferent to what is heard, because they harm the souls of our Greek Christians, particularly damaging our youth.

For this reason I ask that you please listen carefully to my sermon today, and I do not only seek your compassion in this, but also that you struggle together with us against this twisting of our holy and glorious history.

1. Lately, my beloved, there are some who want to show themselves off as educated and polymath's, but in fact they are ignorant and untrue.

But how is it? They, as if they are employed by the Turks, tell us that when our nation was subjugated by the Ottomans, it was all nice and pleasant. We enjoyed privileges, we lived in peace and security, and we have achieved growth.

That is like telling us that it was good we were enslaved to the Turks and became organized! These gentlemen say these things to tell us that there was no reason to revolt against the Turks and the so-called Revolution of 1821 had a different meaning and different purpose.

But if, gentlemen, if it is true that under Turkish slavery there was freedom and all were roses, then how does this explain the harsh torture and the horrific suffering of so many many neomartyrs of our faith? The Turks didn't even allow us to become literate.

We, however, who learned from our ancient ancestors to love the sciences, even though enslaved, we found a way to educate the Greek children. Our Church created the "Secret Schools!" But,

2. As for the "Secret Schools" (Κρυφά Σχολειά), these pseudoscientists tell us this is a myth. And as an argument they tell us that there is no testimony for them. I tell you, however, my Christians, that the "Schools" in which Greek students were taught during slavery were not permitted by the Turks, and were not obvious with their permission, which is why they are called "Secret Schools". The monks did this at night in the monasteries. For this reason, during the period of slavery there is no testimony for "Secret Schools".

But when sweet freedom began to emerge, the same students of the "Secret Schools", men that is, spoke clearly in their correspondence and other writings about these schools. The many locations in our country, attested as "Secret Schools", would not be called so if they were all lies and myths.

3. The revilers of our history are bothered that the Revolution of 1821 is tied to the great feast of our Panagia, the Feast of the Annunciation. And they are bothered again that the Church initiated the struggle.

Among other things, more than these two, my Christians, you need to understand that this offensive movement by these gentlemen essentially is a movement against Orthodoxy and against the Church. This is why it requires a battle, a fierce battle.

(A) In fact, brethren, 1821 is closely tied with our faith, the Orthodox faith. Kolokotronis told his students in Pnyka: "When we took up our weapons, we said first this is for faith and after for homeland"!

For this reason they decided to begin the Revolution on March 25, in order to believe that the miracle was done by the Panagia and the free nation would have as its patron our Lady the Theotokos.

Hence the Revolution of 1821 was a holy revolution of an Orthodox Christian nation against a nation of another religion, a revolution of faith and freedom that was not simply a class revolution for one's interests, as revilers want to show us.

(B) Regarding the other, which contrarians deny and are proved historically groundless, that the fight for freedom in our nation was initiated by the Church.

Indeed, Bishop Germanos spared the fighters from the difficult fast of Great Lent, since it was the month of March when the struggle began. Along with the fighters there were fighting clergy, bishops, priests, deacons and monks.

The great French historian Pouqueville said that 6,000 clergymen had fallen in the struggle for the liberation of our nation.

Some younger people want to cut the marriage between faith and homeland, who set out to make our country atheistic. We warn them that as we fought against the Turks and won, so we will fight against them and reduce them, because in our struggle we have as an advocate the Champion General the PANAGIA, the patron saint of the Greek nation, the Mother of our Jesus Christ.

The revilers of our Faith and Nation will be ridiculed. They deserve it!