Monk Moses: On the Rewriting of Our History 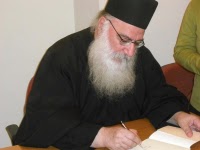 By Monk Moses the Athonite
March 26, 2011
ΜΑΚΕΔΟΝΙΑ
Recently there have been attempts at a shameful rewriting of our history. Neither few nor many connoisseurs agonizingly are trying to convince us that four centuries of Ottoman domination, the great Ottoman Empire, was an ideal period of cooperation, association and communication with our enslaved ancestors, our hapless serfs. The study of Ottoman archives brought to light strong evidence, they say, that the Turks were noble, casual, generous and very polite. Many Modern Greeks are wondering, worried and seriously troubled about the aim of the authors and exponents of these original and unsubstantiated views. 190 years after the Greek Revolution in 1821, they are rewriting our history.
How can it be seriously shown that the Greeks acquired a national consciousness just before the Greek Revolution of 1821? The common origin, the same language, the same religion, similar ethics and customs, do they not show a national consciousness from Greek antiquity? During the Hellenistic and so-called Byzantine era does there not continue a culture lived and created after the famous ancient Greek race? Are clergy, scholars, writers and travelers in error when they speak loudly about how before and after the fall of Constantinople there was a brilliant continuation of Hellenism? Are there not documents that speak of exorbitant taxes for the enslaved, the martyrdoms of the Orthodox, violent Islamization, kidnapping and the making of janissaries? Were the bold fighters, Kleftes and Armatoloi, guerrillas and fugitives as we heard recently? Was the cause of the uprising of 1821 of a purely economic nature? Didn't Marxists theorize in a congress of theirs thirty years ago these monolithic theories?
We do not shout in vain because we have settled and established views that are affected, because this is how we grew up, because it suits us, because we fear being contradicted, because we do not have strong arguments. We are not accustomed to yelling, and not afraid to diverge from non-established new views. In 1821, they say, the Greek nation was established. What existed before? Who dwelled here? Who were those who inhabited here? Do they want to say that in 1821 there was founded the Modern Greek state? Should historians confuse the terms nation and state? Greek history is not given to controversy, ratings and speculation. Our history should not be dramatized and casually humiliated. Let us not insult the spilled blood of heroes for our freedom today. Anyone can submit their personal interpretations of history. But there should be acceptance by all, discussed quite seriously and openly. Will we remove the foustanella and kariophili from the militants and put on them "blue jeans" and automatic weapons? Did not the heroes of 1821 fight "for the holy faith of Christ and the freedom of the country?" Did they shed their blood for economic recovery and the establishment of a nation-state? Did it not start from the Monastery of Agia Lavra? From where did it start? From a tavern? Are the Secret Schools a myth, and the involvement of clergy in the Greek Revolution a fairytale? For 190 years our historians told us such serious lies? Why? So many years we were immature and now suddenly matured to accept the great truth hidden by Mr. Veremis? The truth comes in the deletion of myths? Truth means forgetfulness of oblivion. A vigilant, correct, fair memory of historical events. Why invent and hold on to so many myths? Perhaps it is not a myth and in this lies much truth? Should not the study of the Ottoman archives be extended to the Russian, Austrian, English and even in other Greek anecdotes?
A historian cannot by personal ideology and a strong bias delete without question by a stroke of the pen the offerings of the clergy and Church in the Greek Revolution, throughout the course of the country. This is not a simple debate, defending the honest and blood-stained raso, but an intense and wholehearted protest. The leaders of the newly-formed history have a joyless role, known and ordinary, one without shame, an unnecessary and unwaged war against the sanctified, the righteous and the beautiful. They strike at the Church, Orthodoxy, religion, the clergy, and monasticism. They say in a mature enough time it will level. But the last word of history, the dot and dash, others will surely provide. The Revolution began with the blessing of the Church on 3/25/1821, the day of the Annunciation. The Annunciation brought the resurrection of our doleful and sweet homeland.
Translated By John Sanidopoulos
John at 1:27:00 PM
Share
‹
›
Home
View web version