Metropolitan Atanasije Responds To Remarks In Support of Artemije 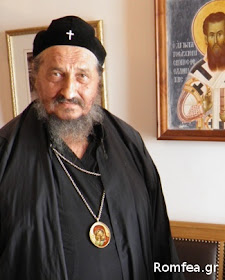 The Church News Agency "Romfea.gr", spoke a moment ago to the former Metropolitan Atanasije of Herzegovina (Jevtic) of the Serbian Orthodox Church.

The former Metropolitan Atanasije of Herzegovina through "Romfea.gr" replied to Metropolitan Seraphim of Kythera, who, in his message on the Sunday of Orthodoxy, wrote among other things:

"In the sensational 20th century there raged along with other heresies and falsehoods the pan-heresy of Ecumenism, which was criticized and condemned by the modern saint of the Serbian Orthodox Church, who was recently proclaimed a saint, St. Justin Popovich.

But unfortunately, today a variety of spiritual children of St. Justin - who proclaimed that the fall of humanity focuses on three individuals: Adam, Judas, and the Pope - not only do not embrace opposition to the pan-heresy of Ecumenism according to the remarks of their holy Spiritual Father, but will tolerate the defenestration and demotion of their virtuous confessor and Brother Bishop, who wars against Ecumenism, the Canonical Bishop of Raska and Prizren Artemije, without indictment, trial and defense, proceeding to joint prayers during the time of the Divine Liturgy and the Service of Artoklasia with the Papal Archbishop and Nuncio, who presumptuously comes forward with Orthodox bishops and clergy to bread blessed by the Patriarch of Serbs! What else shall we see ...."

Mr. Atanasije talking to the director of "Romfea.gr" Mr. Aimilio Polygeni, said: "Greetings Mr. Polygeni, good Sunday of Orthodoxy to you! I received the news that His Eminence Metropolitan Seraphim of Kythera in his message for the Sunday of Orthodoxy refers to the lies of the defrocked Archimandrite Simeon Vilovski and the former Metropolitan Artemije of Raskoprizrenis."

"To what do you refer Your Eminence?"

"I refer to what Metropolitan Seraphim writes concerning Artemije being convicted and deposed without trial. These lies are spread by that defrocked one Simeon Vilovksi.

But Artemios shunned for four years to appear before the court of the Holy Synod. The Church does not force our government to force him to come to court. Canonically according to the 74th Apostolic Canon, after rejecting three committees he suffered the legal consequences for economic and other offenses.

Artemios spreads that he was not tried as he awaited trial in a State court. Now he has sued me on charges of falsehood and slander, but I will bring forward all the data that he lied."

"Your Eminence, are you talking about money? What do you mean?"

"Currently he has 38 monks and twelve nuns and he has formed a conventicle! With the money he took and has in banks in Greece, Switzerland and Serbia, he lead the Metropolis of Raska to be indebted one million euro.

With this money he buys land, apartments and houses, as in Belgrade he bought a floor and has a chapel, and the tenants complain.

The same was done in a village in the Metropolis of Zikis and he is now trying to invade Kosovo. Is man God to not forgive a brother, but he lies because he is not prosecuted for being an anti-ecumenist. We have other more serious problems.

Father Justin criticized the Ecumenism between Rome and Geneva, but supported the Orthodox theanthropic Ecumenism which is the truth of Christ's Universality of the Church.

Artemije lies because Father Justin condemned pseudo-Ecumenism which he called a pan-heresy according to what Patriarch Germanos II (1230) said. We conduct a dialogue in truth as the then Patriarch.

The lies spread by the Holy One of Kythira does not serve Orthodoxy, and I am really sorry to say this on the Sunday of Orthodoxy!

Orthodoxy is truth and honesty, not lies and hypocrisy. Artemije does not know the Canons and he compares himself to St. John Chrysostom, which is megalomania unprecedented."

"Your Eminence, I was in Geneva and briefed by the Metropolitan of Montenegro that there will come to Greece a delegation of the Patriarchate to inform the people?"

"Absolutely, there will come to Greece a delegation of the Serbian Church to inform the people concerning the conviction of Artemije.

We cannot celebrate tomorrow the Sunday of Orthodoxy with lies. The Metropolitan of Kythera is a victim of the lies of Vilovksi, a fatal man of Artemije.

We spoke to him, we wrote him, even the late Patriarch Pavle spoke with him. Since 2006 we struggled to put things in order and nothing was accepted.