The Courageous Reply of the Monks of Mega Spelaion In 1827 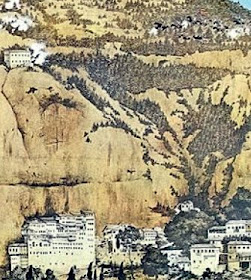 By Metropolitan Amvrosios of Kalavryta
In the year 1827, the nation of Greece was in the throes of a revolution which could only have two outcomes: freedom or the death of all in an eternal and unique example of self-sacrifice. When the blood-thirsty Imbrahim Pasha of Egypt had again conquered Peloponnesos, leaving only ashes and ruins, he turned his attention to the treasures of the Great Cave [Mega Spelaion], the only part of Peloponnesos not subjugated. He marched against the Monastery, a natural fortress, which was guarded by five hundred armed revolutionaries and one hundred young monks.

Most noble Abbot and the priests and monks of the Great Cave.

We inform you that we arrived four days ago at the plain of Kalavryta with the effendi Imbrahim Pasha. We have many arms and are much prepared for the siege of the Monastery of Mega Spelaion. We await soon cannon balls and bombs and many sappers also, so that after one or two days we shall begin the siege of the Monastery and the places round about. Therefore, we ask you to spare your Monastery which aforetime had not been destroyed, but now might be destroyed. Indeed, many more ignorant than you have come and submitted to our effendi and saved their villages, and many people and their life and possessions. You, who are more intelligent than they, are able to consider matters even better.

I shall write you no more; you will also be informed by the letter of my friend Fotilas, who shall himself advise you.

Abbot, consider that this uprising of the Romans will come to no good, therefore, as a sensible man, consider well that you will not end well, but be conquered. Know that what we write, we write at the orders of our most high effendi; answer to us what we have written.

The Abbot and monks of Mega Spelaion responded with the following letter:

Most sublime leader of the Ottoman forces, Hail.

We have received your letter and have read it. We know that you are in the plain of Kalavryta for many days and have all the means to wage war. It is impossible for us to submit, because we have vowed on our Faith to become free or to die fighting, and as long as we exist we cannot break this sacred vow to our fatherland. However, we advise you to go wage war somewhere else. If you come here to war against us and you conquer us, the evil thing is not great, for you have only defeated clergy. But if you should be defeated by us, which is our sure hope in our impregnable position with the help of God, it will be to your shame, and the Hellenes will take heart and hound you everywhere.

Such is our advice, and you, as a wise man, do what is to your advantage. We have letters as well from the parliament and the Marshal Theodore Kolokotronis stating that if needed they will send us much aid, soldiers and supplies, and that either we will be freed quickly or die according to our sacred vow for the fatherland.

Damascene, Abbot
and the other priests and monks with me.

Divine power, however, animated and encouraged the six hundred defenders of the Monastery against the more than ten thousand well-armed foe. After an epic battle on June 24, 1827, the enemy troops retreated, while the unharmed defenders with all those who had sought refuge there chanted hymns and praises to the saving Champion Leader, the Mother of God, who humbled the foe and raised the trophy of victory.