The Church of the Multiplication of the Loaves and Fishes 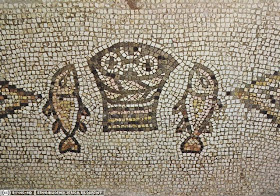 The Church of the Multiplication of the Loaves and Fishes, also known as the Church of the Multiplication is a church in Tabgha, or ancient Heptapegon on the northwest shore of the Sea of Galilee. The modern church stands on the site of 4th and 5th-century churches. The church preserves a splendid early Christian mosaic as well as the traditional stone on which the miraculous meal was laid.

The feeding of five thousand people is described in Mark 6:30-44, just before Jesus walks on water. The Gospel does not specify where it took place; only that it was in a "remote place" (6:32,35) on the shores of Galilee. 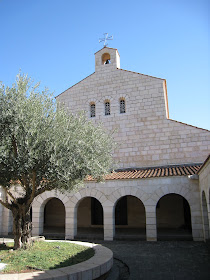 While it is remotely possible that this is the actual site of the Feeding of the Five Thousand, it's not likely. Scholar Jerome Murphy O'Connor attributes the selection of the site to pilgrims' associations with the area.

"It was perhaps inevitable that this well-watered area with its shade trees on the shore of the Sea of Galilee, where Byzantine pilgrims ate their picnics, should have been identified as the location of two episodes involving the consumption of food, the multiplication of the loaves and fishes and the conferral on Peter of the responsibility of leadership after a fish breakfast. Then it became convenient to localize the Sermon of the Mount on the small hill nearby." A church of the Feeding of the Five Thousand was first built on this site in 350 AD. The church was small and on a slightly different orientation than the later versions. The Spanish pilgrim Egeria visited this church in the 380s, and reported:

Visiting the church today, visitors will find under the altar table a block of limestone venerated as the table of the Lord. Pilgrims are no longer permitted to chip away at it. In front of the altar is a lovely restored mosaic of two fish flanking a basket of loaves.

Besides its sacred importance as the place of a miracle of Jesus, the main highlight of the Church of the Loaves and Fishes is this beautiful 5th-century figurative mosaic floor. It is the earliest known example of a figured pavement in Palestinian Christian art.

The main mosaic covers the two transepts and the intervals between the pillars. The rest of the floor has a mosaic in a simple geometric pattern, mostly restored. The principal mosaic was clearly designed by a great master who was able to create a free-flowing design without need of any repetitious pattern. 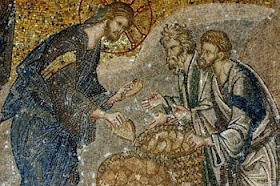