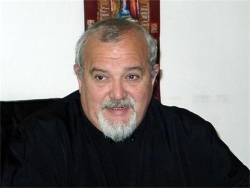 March 29, 2011
Novinite
Kamen Barakov, a priest from Bulgaria's alternative synod, who was among the front-runners of the rebel clergy, has been killed in a car crash.
The crash occurred on Monday on Sofia ring-road near the villages of Busmantsi and Kazichane. Barakov was driving his own BMW, but it was not immediately clear what caused the crash and whether other cars were involved in it. He died on the spot.
Kamen Barakov was one of those who secured the Alternative Synod victory in the Strasbourg European Court of Human Rights, which ruled in September last year that the Bulgarian state has unduly forced Bulgarian Eastern Orthodox Christians to worship under only one Church by chasing out clergy from the 'alternative' synod out of temples.
The schism in the Bulgarian Orthodox Church was started in 1992 when a group of senior clergy headed by Metropolitan Pimen of Nevrokop decided to split from the rest, claiming that a Church headed by allegedly communist-related Patriarch Maxim is illegitimate.
The rightist Union of Democratic Forces cabinet of PM Filip Dimitrov was instrumental in supporting the rebel clergy and even attempted to ban the prior synod headed by Maxim, only to be countered by Bulgarian courts.
In 1998 Pimen repented in front of the Bulgarian Orthodox Church, but after his death one year later the schism was flared up by his successor Inokentii in the alternative synod.
In 2004, the Bulgarian police stormed through 250 churches countrywide and detained many priests of the 'alternative' synod to restore proprietorship to the official Bulgarian Orthodox Church.
John at 3:32:00 PM
Share
‹
›
Home
View web version