Are ALL Creeds Wrong Because They Think They Are Right And Others Wrong? 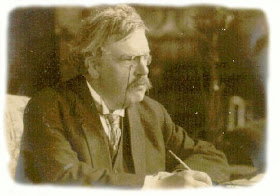 Don’t say, “There is no true creed; for each creed believes itself right and the others wrong.” Probably one of the creeds is right and the others are wrong. Diversity does show that most of the views must be wrong. It does not by the faintest logic show that they all must be wrong. I suppose there is no subject on which opinions differ with more desperate sincerity than about which horse will win the Derby. These are certainly solemn convictions; men risk ruin for them. The man who puts his shirt on Potosi must believe in that animal, and each of the other men putting their last garments upon other quadrupeds must believe in them quite as sincerely. They are all serious, and most of them are wrong. But one of them is right. One of the faiths is justified; one of the horses does win; not always even the dark horse which might stand for Agnosticism, but often the obvious and popular horse of Orthodoxy. Democracy has its occasional victories; and even the Favorite has been known to come in first. But the point here is that something comes in first. That there were many beliefs does not destroy the fact that there was one well-founded belief. I believe (merely upon authority) that the world is round. That there may be tribes who believe it to be triangular or oblong does not alter the fact that it is certainly some shape, and therefore not any other shape. Therefore I repeat, with the wail of imprecation, don’t say that the variety of creeds prevents you from accepting any creed. It is an unintelligent remark.

Now it is very right to rebuke our own race or religion for falling short of our own standards and ideals. But it is absurd to pretend that they fell lower than the other races and religions that professed the very opposite standards and ideals. There is a very real sense in which the Christian is worse than the heathen, the Spaniard worse than the Red Indian, or even the Roman potentially worse than the Carthaginian. But there is only one sense in which he is worse; and that is not in being positively worse. The Christian is only worse because it is his business to be better.
John at 3:42:00 PM
Share
‹
›
Home
View web version