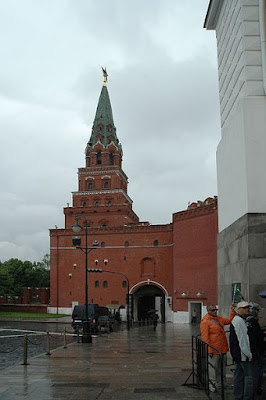 The Blagoveschenskaya Tower (Russian: Благовещенская башня), known in English as the Annunciation Tower, was erected in 1487-1488. At its foundation are slabs of white limestone that have survived since the time of the white stone Kremlin of the 14th century.

During the reign of Ivan the Terrible, the tower was used as a prison. The name of the tower comes from the miracle-working Icon of the Annunciation, which was once kept here, and is also associated with the Church of the Annunciation added to the tower in the early 18th century and demolished in 1932. The icon appeared written on plaster on a wall of the Kremlin tower prison. In 1731 Empress Anna Ivanovna ordered the stone church be built around the icon so that the external side of the tower with the icon was inside the church. In the 17th century, the Portomoyniye Gates were built nearby so that palace laundresses could go to the Portomoiny raft on the Moscow River to rinse porty, or underclothes. These gates were bricked up in 1813.