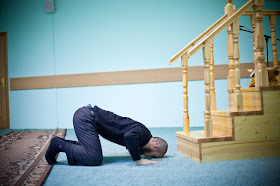 Rustam Sarachev should have had a hangover the first time he set foot in the central mosque here. He had wanted to throw a raucous party the night before, a send-off for himself on his way to Islam. But the guys he was with had mocked him for even thinking about the mosque, and had gone off drinking on their own.

So here he was, regretfully clearheaded in the daylight, 500 rubles unspent on vodka and still in his pocket, heading up the steps of the big salmon-colored mosque that dominates one end of this minor oil city east of the Volga.

It was late September 2006, the beginning of Ramadan. As he looks back on it now, he remembers that he wasn't sure why he had decided to come, or what to expect. He was 17, at loose ends, a self-described hooligan, a troublemaker, starting to get hardened by a life that was heading for the verges of the law, yet still vulnerable to the insults and disdain that seek out young men with no future here.

When he walked through the great double door of the mosque, he was taking his first steps toward joining an intense Islamic revival here in the Muslim heartland of Russia that is drawing particular strength from its young people.

Sarachev was 2 years old when the Soviet Union collapsed, 5 when the first war in Chechnya broke out, 12 on 9/11. His whole life has been an era of cataclysms, of an old world being torn apart, of war against Muslims, at home and abroad. Old identities, old certainties, have proved empty. And now he was joining others here of his own generation who are finding, in religion, an alternate authority. They are joining a global community, and at a time when great passions are stirring that community.

They learn at the mosque that Allah is punishing Iraqis for their heresies. They learn that 9/11 was carried out by American agents, or maybe agents from somewhere else, to provoke a war against Muslims. But they learn, too, that those who want to go and join the fight in Afghanistan, or Pakistan - and young men who aimed to do precisely that have passed through Almetyevsk - are in error. This is not the time. Islam needs them here, in Russia.

Their faith, in any case, is not ignited by politics. If it were, the Russian authorities would have cracked down on the mosque long ago. Sarachev came up those steps, on that day four years ago, not out of anger but in search of a way out of the pointlessness of his own life.

Built in the 1990s with Saudi backing, the mosque makes a strong physical statement. Inside, it features intricate woodwork, handsome red and green carpets and painstakingly assembled blue tile mosaics. On holidays, believers pack its services. During afternoon prayers, as they face to the southwest, toward Mecca, a window to their right might give them glimpses of a glorious pearly pink sky, otherworldly almost, even as the setting sun glints off the five golden domes of the Orthodox church across the way.

"I was shocked," remembers Sarachev. "I couldn't understand where I was. There were only young people, all around. They treated me so well. I'd never been welcomed like that before."

He saw familiar faces. Almas Tikhonov, who had been a big partier and a roughneck, and then had dropped from sight, was there, praying. Sarachev was impressed by the way Almas looked; there was a compelling serenity about him.

In the days that followed, that picture lingered in Sarachev's mind. He decided to go back to the mosque, and then again, and again. He had to endure the jibes of his old friends, and that was hard - but maybe it stiffened his resolve, too. As he began to see them in a new light, it made it simpler to give up the drinking, the hanging out on street corners, the sneaking off to a village where they could party all night, away from parents' eyes. Sarachev eventually came to understand that the world is full of devils, and that the duty of a good Muslim is to overcome those devils.

And somewhere here, he knows, though he's still working it through in his own mind, lies the meaning of jihad. "It's a struggle against those who don't believe," he says. "It's not a test. Jihad is a war."