The Pierced Soul of the Theotokos (St. Nikolai Velimirovich) 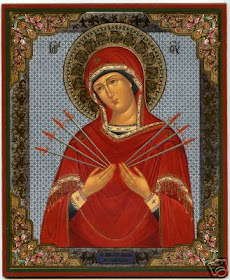 By St. Nikolai Velimirovich
"Yea, a sword shall pierce through thine own soul also" (Luke 2:35).
Who on this earth could even closely compare with the Lord in patient endurance of suffering except His Most-holy Mother?

The elder Symeon, adorned with snowy hair like a white swan, prophetically foresaw her future sufferings and likened those sufferings to a sword piercing her soul. One sword had pierced her soul when the righteous Joseph doubted her at the time of her pregnancy; the second, when she had to flee to Egypt before Herod's sword; and the third, fourth and many, many others when she saw the hatred and intrigues of the Jewish elders against her Son day in and day out during the whole time of His preaching and miracle-working among men.

But the sharpest sword pierced her soul when she stood beneath the Cross of her Son and Lord. This sword was foreseen and prophesied to her by the holy, aged Symeon. Majestic and moving was her silence, beneath which she covered all her pains and all the wounds of her heart as with a veil.

In the twilight, all these countless pains that had accumulated in her most pure heart shone as an inextinguishable flame of faith and hope in God and dedication to God. This handmaid of the Lord, unsurpassable in nobility! She saw herself clearly in God's plan for the salvation of mankind; she read about herself in the prophets; she spoke with the angels - God's messengers. Therefore, all that came upon her, joy or pain, she knew came from God. She was not jubilant in her joy nor did she murmur in her pain, but rather she remained silent and laid it all up in her heart.

O Most-holy Virgin Theotokos, help us that we may be, like thee, submissive to the will of God. To thy Son and Lord, through thee, be glory and praise forever. Amen.