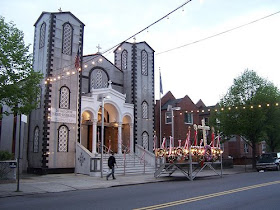 Metropolitan Paisios of Tyana and Bishop Vikentios of Apameia have been officially suspended as abbot and deputy abbot of the St. Irene Chrysovalantou Sacred and Patriarchal Monastery in Astoria, NY. On December 17th it was also decided by the Ecumenical Patriarchate that they are both suspended from every clerical duty pending the outcome of an investigation concerning alleged sexual and financial misconduct.

Both Metropolitan Paisios and Bishop Vikentios have been instructed by the Holy Synod to remain outside of the United States from hereon in. According to The National Herald, if either of them defies the decision or attempts to involve themselves in the affairs of the monastery or the Church in general, they will be subject to punishments foreseen by canon law.

The decision was made at a meeting of the Holy and Great Synod of the Ecumenical Patriarchate on Thurs. Dec. 2, 2010, following a report submitted by a patriarchal delegation which had come to investigate the monastery last month.

Bishop Ilia of Philomelion was named acting abbot while a group of three monks have been sent from Mt. Athos to man the monastery. These three monks will remain at the monastery for about a month in order to offer confession to the people and help refocus the monastery. The three monks are Archimandrite Hierotheos who heads the Athonias Ecclesiastical Academy and serves as Chancelor of the Metropolis of Patras, Archimandrite David who is the elder of the Holy Cell of the Archangels in Karyes under the Monastery of Hilandari, and Hieromonk Philimonas of the Holy Monastery of Stavronikita. According to reports, the Holy Monastery of St. Irene Chrysovalantou will likely become a brotherhood with Athonite monks.
John at 8:50:00 AM
Share
‹
›
Home
View web version