Stories of the Post-Nativity Virginity of the Theotokos 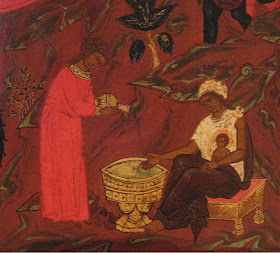 At that time, there lived in Bethlehem the aged Salome, a kinswoman of Joseph and Mary. She was unable to receive her kinfolk at her house but visited them in the shepherd's cave. When the Most-holy Virgin immaculately gave birth to the Lord and Savior, Salome came to visit her. She was amazed that such a young girl could give birth without the aid of a midwife, swaddle the Child herself, and beside all of that still be on her feet.

When it was explained to Salome that this birth was of God and not man, that it was immaculate and without pain, and that the Virgin Mother remained a Virgin after birth as she was before birth, Salome did not believe it, but rather she stretched out her hand to the body of the Most-holy Virgin to examine it, after the custom of a midwife, and to find out if this was indeed so. And because of her unbelief and insolence, a punishment befell her: her hand was seized and withered. The aged woman was greatly frightened by the miracle and lamented over her withered hand. However, when she touched the Divine Child later, her hand was restored to health like it was before. Thus, Salome believed in the virginity of the Most Pure Virgin Mary and in the Divinity of Christ.

Thus after forty days, when according to custom the Most Pure Virgin came with the young Child to the Temple in Jerusalem, Zacharias the high priest placed her in the area reserved for virgins. The Pharisees and priests were disturbed by this and wanted to remove her to the place reserved for married women, but the discerning Zacharias did not allow this, claiming, that she was a virgin even though she had given birth. Because of this, the Jewish elders hated Zacharias and sought from Herod that he be killed. Immediately after she left the Temple, the Theotokos and Joseph left from Jerusalem to Nazareth and then to Egypt.