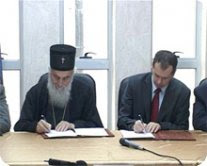 It would be good to launch talks between churches in 2013, Serbian Orthodox Church (SPC) Patriarch Irinej stated on Saturday.

“It is good for church representatives to gather and launch a humane and friendly dialogue, while other issues between churches can be left for a later time,” Irinej said during signing of a contract on the construction of a complex commemorating the Roman Emperor Constantine the Great (306-337) in Niš.

Constantine the Great was born in the vicinity of today's southern Serbian city of Niš.

Partiarch Irinej and Niš Mayor Miloš Simonović signed an agreement on the transfer of city-owned land on Vinik Hill to the SPC, which would use it to build a religious complex devoted to the memory of Constantine the Great.

The signing of the agreement was also attended by Serbian Deputy Prime Minister Božidar Đelić.

“A dialogue between Christian churches is a process, and it is important to initiate it,” the patriarch noted.

Construction works at the site will start early in 2011, and are due to be completed by the 1.700th anniversary of the adoption of the Edict of Milan.

The Edict of Milan was the legal act which proclaimed religious toleration and marked the end of the exile of Christians in the Roman Empire.

A cross which will be visible from all parts of Niš will be built on Vinik Hill, at 400 meters above sea level.

The cross will be 80 meters high and 40 meters wide, made of metal, with an elevator and two platforms.

The complex will span across 13 hectares and will comprise a hotel, a museum dedicated to Emperor Constantine, an amphitheatre, a cinema, a media centre and a souvenir shop.