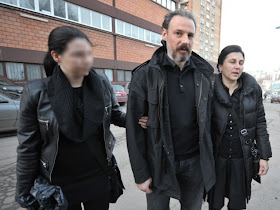 The money that was being sent to the Raško-Prizren Eparchy was also to be used for the soup kitchens in Kosovo which feed about 1200, but it seems instead they were going straight to private riches and luxurious lifestyles for several of the recently defrocked Artemije’s closest colleagues, including Monk Simeon Vilovski, his brother Vladimir Vilovski, his godson Predrag Subotički and Gordana Marković, who was the director of the State Bureau for the Protection of Cultural Monuments in 2007.

The investigation showed that Vilovski and Suboticki were buying apartments in Belgrade and property in Greece with church funds. Serbian police minister Ivica Dacic said that at least 350,000 euros were handed out in cash from church funds to pay fictional construction bills.

Vilovski is at large in Greece, after the Greek Supreme Court denied Serbia's extradition request and released him in mid-July.

Predrag Suboticki, upon initiation of the trial, was released on bail by request on 22 December 2010 to gather the evidence for his defense and to attend to his health and family.