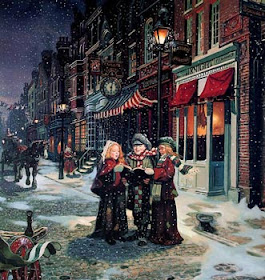 By Fr. Geoffrey Korz
For Orthodox Christians in the western world, Christmas can create something of an identity crisis. While it is difficult enough to extricate a personal schedule from multiple pilgrimages to the shopping mall (a distinctly un-Christian aspect of modern Christmas), it is sometimes far more difficult to know what to make of Christmas carols and songs, and their appropriate place in the life of an Orthodox Christian.

None of us live in a vacuum. As such, the varied music of our culture almost inevitably finds its way into our lives, our memory, and our heart. Orthodox liturgical music represents the central place of music in the life of any faithful Orthodox Christian: it is music suited for the right worship of God, and comes to us through the life and experience of the countless holy ones that make up the communion of saints.

For this reason, Christmas carols and songs certainly do not have a place in the liturgical life of the Church: most are not dogmatically helpful or clear, and they have never formed a part of the hymnody used by the saints of the Church, as it has been given to the faithful.

Most of the Christmas carols that have come to us in the English language date from the 1700s and 1800s, and offer narratives of the Gospel accounts of the Nativity of Christ. While these usually use archaic English in a creative way, they are certainly faithful witnesses to the Gospel. We can think of favourites such as Angels We Have Heard on High, Away in a Manger, or God Rest You Merry Gentlemen, which raise little question in their suitability for an after-supper carol sing in an Orthodox home. Other traditional carols convey the story of events close to the Nativity of the Lord: the traditional Advent Latin melody O Come, O Come, Emmanuel dates to near pre-Schism times (the early 12th century, in this case), and can almost be described as a song from an Orthodox culture. The Coventry Carol tells the tragic tale of the massacre of the innocents described in the second chapter of Saint Matthew. The Twelve Days of Christmas provides a catechism of Roman Catholic origin that counters iconoclasm during the Protestant era in England. The symbolism of the carol is still useful today to teach Orthodox children (and adults) about the four "calling birds" of the Evangelists, and the three "golden rings" of the Holy Trinity.

Some carols offer poetic allusions to Gospel or other Scriptures. Songs such as Ding Dong Merrily on High, We Three Kings, Joy to the World, and While Shepherds Watched Their Flocks by Night, are artistic folk songs of their time, and warmly tell parts of the Nativity story. Although not written by an Orthodox Christian, The Holly and the Ivy offers a Christian understanding of pagan symbols that would be familiar to many Slavic Orthodox. Even the famous carol, Hark The Herald Angels Sing by the Protestant preacher Charles Wesley, provides poetry relating to the Gospel in a way that does not contradict an Orthodox understanding.

Historical fiction such as The Little Drummer Boy offers a creative expression of a simple encounter with Christ. Similarly, Christmastime tales of the life of an Orthodox saint like Good King Wenceslas (who died as a martyr at the hands of his pagan brother Boleslaus) provide a small sample of the lives of the saints which faithful Orthodox Christians should read each day.

Some carols have become popular because of a certain sentimentality they elicit, rather than their doctrinal helpfulness. Songs such as O Holy Night, O Little Town of Bethlehem, Silent Night, and "What Child Is This?" may not have much content that could be questioned by Orthodox Christians, yet their sentimental tone seems to lack something of an Orthodox spirit. The enjoyment of Christmas carols certainly must go beyond mere musical critique, however, carols like these were clearly born out a very emotional world quite foreign to the world of the Orthodox Church.

Some "carols" are actually openly heretical. The 19th century song, It Came Upon the Midnight Clear, is a case in point. Written by a Unitarian minister, the song explicitly sets out to popularize the idea that one can celebrate Christmas without the reality that God took on human flesh, expunging any supernatural references, and making a "miracle" out of the birth of a "great man." The lesser known Seven Joys of Mary articulates a Roman Catholic teaching that includes the "crowning" of the Mother of God in Heaven, a teaching that emerged in the Latin west long after her departure from the Orthodox Church.

There are other, particular cases. The 1962 song, Do You Hear What I Hear?, was allegedly written as an appeal for the de-escalation of the Cuban Missile Crisis, using the imagery of the Nativity story being proclaimed by people of high and low estate. Secular wintertime folk songs, such as Deck the Halls and Jingle Bells, really cannot be called Christmas carols, since they are made up of pure Victorian nostalgia, and have no Christian content. Silly, modern secular songs such as Rudolph the Red Nosed Reindeer and Rocking Around the Christmas Tree have little at all to do with Christmas, and even less to do with aspiring to emulate the best offerings of western civilization.

In his letter to the Philippians (4:8), Saint Paul tells us to hold to everything that is good. A wonderful variety of Christmas carols that affirm the truth of the Gospel, and the Nativity of Christ, have come down to us in the English language, and are entirely suitable for use in the homes of Orthodox Christians. At the same time, silly songs or those that teach false things, should not really be confused with Christmas, a feast that celebrates God’s great gift to the world, in the incarnation of His Son.

Apart from the Resurrection, this is the single greatest event in human history, and it gives us our very identity as Christians – and identity which solves any identity crisis we might ever face in our lives. We should celebrate it at every opportunity.

For other perspectives on this topic, read here.
John at 9:14:00 AM
Share
‹
›
Home
View web version