Metropolitan Seraphim of Piraeus Spreading Conspiracy Theories Based on the "Protocols" 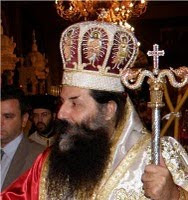 Metropolitan Seraphim has been instrumental as of late in spreading conspiracy theories and unfounded fears among Greeks. This year alone he has appealled to the Greek government for the dissolution of Freemasonry in Greece based on the accusation that they worship Satan, opposed the new Greek Citizen's Card because it is a forerunner to the Mark of the Antichrist, and supported the Artemian schism in Serbia. Below is his latest spread of misinformation, obviously infuenced by the discredited Protocols of the Learned Elders of Zion.

Metropolitan Seraphim of Piraeus says Hitler was just a Zionist instrument to convince the Jews to leave Europe to Israel and 'establish the new Empire', JTA reports.

A leading priest in Greece said that the world Jewry was to blame for the country's financial problems, the Jewish Telegraphic Agency reported on Wednesday.

While being interviewed on a morning show of Greece's largest television station, Mega TV, the Metropolite of Piraeus Seraphim said that international Zionism tries to destroy family values by promoting one-parent families and same-sex marriages, and said there is a Zionist conspiracy to enslave Greece and Christian Orthodoxy.

The Metropolite also said that Hitler was just a tool used by Zionists in order to ensure the establishment of Israel.

When the Greek host asked him, "Why do you disagree with Hitler's politics? If they are doing all this, wasn't he right in burning them?," the Metropolite answered, "Adolf Hitler was an instrument of world Zionism and was financed from the renowned Rothschild family with the sole purpose of convincing the Jews to leave the shores of Europe and go to Israel to establish the new Empire."

He went on to say that Jews such as "Rockefeller, Rotchschild and Soros control the international banking system that controls globalization."

The JTA quoted the president of the Athens Jewish community, Benjamin Albala, as saying: "Watching and listening to the program, I felt disgust hearing the Metropolite of Piraeus expressing himself like that against world Zionism, and shamelessly saying that Hitler with the help of Jewish bankers did what he did."