Metr. Ignatios: "Racism and Anti-Semitism Does Not Reflect the Faith of the Church" 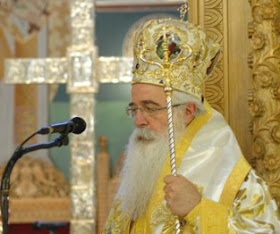 "Racism and Anti-Semitism, from wherever and from whomsoever derived, can not express the faith and the consciousness of the Church. Especially in these days, Orthodox Christians do not forget that our Lord Jesus Christ was born a Jew, and nobody is entitled to insult the memory of 6,000,000 innocent victims of the Holocaust. From the manger of the God-man in Bethlehem where He was humbly born has dawned hope and light, not fear and connotations against anybody," said the Metropolitan of Dimitriados Mr. Ignatios in a statement in connection with the statements of Metropolitan Seraphim of Piraeus on Israel.

He also said that "The timeless conscience of the Church is expressed by the example of major prelates, including Archbishop Damaskinos, Chrysostomos of Zakynthos and our late predecessor Joachim, who each in their own way, and motivated by genuine Christian feeling, helped save thousands of Greek Jews. This is the tradition of the Greek Orthodox Church; follow this."