A Homily on the Righteous Joseph 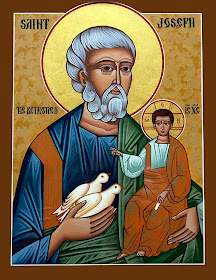 By St. Nikolai Velimirovich
"Then Joseph her husband, being a just man … did as the angel of the Lord had bidden him" (Matthew 1:19, 24).

One must fear God more than men, and one must obey God more than men. This is the lesson from the life of the Righteous Joseph, the kinsman and guardian of the Holy Virgin Mary. He lived at the time of the juncture between the Law and grace, and was faithful to the Law until grace appeared; then, when the new grace of God appeared, he became faithful to grace.

Obedient to the letter of the Law, he wanted to put the Holy Virgin away when she conceived the Savior of the world in her most pure body. But when an angel of God announced to him that Mary had conceived of the Holy Spirit (Matthew 1:20), he abandoned his intention and did not put her away, but did as the angel of the Lord had bidden him. He did not reason for himself, but obeyed the will of God.

Therefore, God made him worthy of great glory, both on earth and in heaven. Quietly and secretly he served God, and God glorified him openly. Not only was he made worthy of the Kingdom of God but also his sons and daughters were. What father would want anything more than that his son would be an apostle of Christ? And Joseph had two sons who were apostles. Thus, God glorifies those who fear Him and obey Him.

O great Lord, God of the righteous Joseph, help us sinners also to love Thy righteousness and to fear only Thee. To Thee be glory and praise forever. Amen.
John at 7:59:00 AM
Share
‹
›
Home
View web version