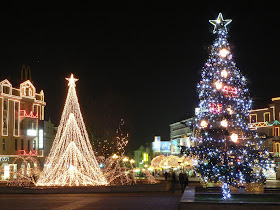 In Bulgaria there is a common belief that the whole next year is correlated with Christmas Eve; the forthcoming year will be as good as this special evening. Therefore the whole family becomes involved in performing the rituals.

For Orthodox Christians, Christmas comes after 40 days and nights of fasting. The forty-day Advent, started on November 15, finishes on this day. Folk beliefs hold it that the Mother of Jesus began her labors on St. Ignatius’ Day and gave birth to God’s son on Christmas Eve, but that she told of it only on the next day. Throughout the fasting period, Orthodox Bulgarians will avoid alcohol and animal products. Even the festive dinner on the eve of Christmas is vegetarian and includes no meat, cheese, milk, eggs or animal oils.

Bulgaria's Orthodox Church recommends 13 different foods on the Christmas-eve meal (salt, pepper and sugar are seen as separate foods). The foods are vegetable and odd in number for luck. Beans are a traditional Christmas Eve dish in Bulgaria, as families gather that evening to a meatless holiday meal.

This is the most important family event of the year. There are always walnuts on the table. Traditionally, wheat is boiled and dishes such as boiled haricot, leaves stuffed with rice or grouts, and stewed dried fruit are cooked. Wheat grains and the Ignazhden (Saint Ignatius’ Day) kolaks (ring-shaped cake) are also put on the table. After the festive mass starting at 12:00 am on December 25, all should drink a sip of wine so that the divine blessing should come upon them as fasting ends. A place at the table is left vacant for the deceased (relatives or other dear people). The table is not cleared for the night because people believe that the deceased will come to dinner. The return to meat and dairy comes on Christmas day, with, one should hope, a cleansed mind and spirit for the coming year.

At the Christmas Eve table, fortunes are told. To predict what the year is going to be, everyone cracks a walnut. If it is good and delicious, the year is going to be lucky, if the walnut is empty, you can expect a bad year. Predictions are also made for the weather in each month of the New Year, the expected crops, each family member's health, and for the coming marriages of the girls. Christmas Eve requires much time and efforts from each family member. The women-folk arise very early in the morning and are busily preparing the festive meals during the whole day. They spare no pain to be ready with everything and to be able to follow the traditions when Christmas Eve comes. It is believed that the way Christmas Eve goes is the way life during the following year will go. No work is done in the fields; everyone's efforts are home-centered. Certainly, a festival as important as Christmas Eve deserves to be celebrated in the proper manner.

At midnight on Christmas, the koledari (carollers) start their round. Only boys participate as major figures in the ritual known as Koleduvane. Its purpose is to wish health, good luck and fertility to the heads of households, to their houses, livestock, land, etc. The koledari, as those participating in the ritual are called, are divided into two age groups. Each group may consist of 10 or more koledari who divide the homes of their village or neighborhood among themselves to be sure each will be blessed. The preparations include learning of songs and dances, and decorating costumes, which include the kalpaci (fur hats) ornamented with bouquets of boxwood and wild geranium, carved wooden staffs, yamurluci (hooded cloaks) which are made to size, sandals, and new fancy leggings. The magnificent embroidery on the white shirts is especially beautiful.

The koledari songs are characteristically lively, happy and festive, and are performed antiphonally. The group divides into two subgroups, then one group begins, and the second group repeats what the first group has just sung. The songs can be divided into several themes: those which are sung on the road from one house to another, those which are sung while entering or leaving a house, those devoted to the head of the house, those for the women, those for small children, those for unmarried girls, those for soldiers, those for the livestock, those for the fertility of the fields, and so on. At the end of the performance, the head of the household gives stedro (from his heart) - so called Koledni gevreci (round buns), banitsa (a multi-layered pastry filled with bulgarian cheese (sirene), fruits, walnuts, popcorn and other traditional delicacies.

Today, Christmas is still a very special family holiday in modern Bulgaria. In the cities, the koledari tradition is not followed as strictly as in the villages. However, city dwellers should not be surprised if kids (survakarcheta) knock on the door after midnight on Christmas to sing a song, wishing happiness, love, health and wealth during the coming year.

December 26 is celebrated as the second day of Christmas in Bulgaria. It is officially a non-working day. It is a day to pay tribute to Jesus' mother Virgin Mary. Bulgarians believe that Virgin Mary will bring their prayers to Jesus, as she is His closest person.