Celebrating Christmas In The Shepherds' Fields Of Beit Sahour 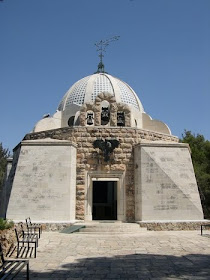 Beit Sahour lies to the east of Bethlehem and south-east of Jerusalem. The area is full of historical and biblical sites of significance. Ruins from Roman, Byzantine, Islamic and Crusader times can be found throughout the area, including the Shepherds' Fields, the fields identified since ancient times with the shepherds who saw the Star of Nativity. Today, Beit Sahour is home to 14,500 residents, 80% Christian and 20% Muslim. Father Ignatius is the priest from the shepherd's monastery in Beit Sahour and Paul Calvert chatted with him to find out more of the area's significance.

Paul: What is Beit Sahour famous for?

Father Ignatius: The city of Beit Sahour is famous for the land; for the fields. This is where the shepherds were the night Jesus was born in Bethlehem and the message was given by the Arch Angel Gabriel. It is very famous because of the message that the angels gave to the shepherds and this message was spread all around the world from this simple place.

Nowadays it is famous because of the money and the pilgrims that it attracts. They come to visit this holy site, the old cave, where the shepherds got the message and where the shepherds are buried. They also come for the ruins of the old monastery from the time of Queen St Helena.

This place dates back to the time of Jesus. There is a history of about 5,000 years here; when Jacob the patriarch came with Rachel and then Boaz and Ruth and of course their son. Then Jessie who was the father of David was here and later David as a shepherd also. This area was the property of the parents of the Virgin Mary.

Paul: If I was to walk down the streets of Beit Sahour would I see sheep and shepherds today?

Father Ignatius: Not today, because it is a populated area. It used to be part of the Judean desert but today it is a big city. The population of Beit Sahour is about 16,000 people, so today you will only see houses and hotels and restaurants; there are no sheep today.

Father Ignatius: It is about 2-3 kilometres from here to the Nativity Church. Walking it would take 20 minutes to get to Bethlehem.

Paul: You have a very beautiful monastery here on the property. How long has the church been here?

Father Ignatius: The new church where we are now was built in 1985 but the older church inside the cave of the shepherds was built in the year 326 by Queen St Helena.

Paul: What sort of archaeological things can you see down there?

Father Ignatius: For the visitor and the tourist he will first of all visit the new church here and then we go down there to the cave, which was converted into a church by St Helena in the 4th Century. After that a very big monastery was built and it had about 200 nuns, but it was destroyed by the Persians. In the year 614 it was rebuilt again and renovated and became a monastery for monks. It was again destroyed and burned by the Arab invasion in the 7th Century and then it was rebuilt again, but destroyed completely by the Crusaders. From the 12th Century to the year 1971 the only church that existed was the old church of St Helena, but it was used for prayers by the local Arab Greek Orthodox people.

Paul: Have you had any archaeological finds?

Father Ignatius: Yes in the year 1980 - 82 we had someone from the Rockefeller museum in Jerusalem who started excavation for five years. They found ruins from all these monasteries, from the 4th-7th Centuries and a huge church that was built by Justinian the emperor. They also found ruins from another church, which was built by the patriarch of Jerusalem. They found mosaics and signs written in the old Greek language from the 5th Century and the 7th Century; ruins from the tower of flocks referred to in the book of Genesis and ruins from the rooms from all these monasteries and all these century's. It's a great history.

Paul: You also have a garden here with many olive trees in it. Do many of these olive trees date back a long time?

Father Ignatius: We have about 200 olive trees; some of them are about 2100 years old, which means that they were planted before the birth of Jesus. We take care of them so that they will live longer. Even now they give oil and olives. We have a great garden. Most of the trees are new, but yes those olive trees they are so old.

Paul: What's it like for you being here and ministering to the people of Beit Sahour?

Paul: How do people celebrate Christmas in Beit Sahour?

Father Ignatius: Like everywhere; like in Europe. We celebrate Christmas here with the old calendar, which means we have Christmas on 6th January. I believe here it is brighter; people understand and they feel more joy and happiness because they celebrate Christmas so near to Bethlehem where Jesus was born.

I believe the pilgrims that come during Christmas time feel the message of Christmas and they live every moment and every prayer and they enjoy visiting any place around the Bethlehem area. They also like visiting Beit Sahour and the city of Beit Jala.

There is a monastery near by, which is the place the three wise men stayed when they left Bethlehem to return back to Persia. There is a cave they stayed in one day and one night and they returned back to their country, so all the area here is considered holy. It's very important and very unique, but for someone to understand he has to visit and come and see.

Paul: In the West we eat turkey at Christmas. Do they have the same here?

Father Ignatius: They have turkey here. They decorate Christmas trees and also the streets are decorated with Christmas trees and I see that the Arab Christian people they also celebrate like everywhere in America and Europe. They follow the same customs in the area of celebration.

Paul: Does it snow here in Beit Sahour?

Father Ignatius: Very rarely. We had snow here about 10 years ago and a few Christmases ago, but not so much, because the weather here is so warm and the winters are so mild.

Paul: What's your prayer for the people of Beit Sahour this Christmas time?

Father Ignatius: Our prayer is that the people will be happy. We struggle for peace, but even though it is difficult, we never lose hope. Our work is always to pray and to give the message of peace and hope to people and we hope that one day all of us will live in harmony. That will happen in heaven, but we also want life here on earth to be peaceful too. It is so difficult; the unemployment, no work, so we at the monastery try to help people to understand and feel the message, not only the message of Christmas but in any celebration, even when we celebrate Easter, we try to give the message of happiness and joy to all the people.
John at 8:30:00 AM
Share
‹
›
Home
View web version