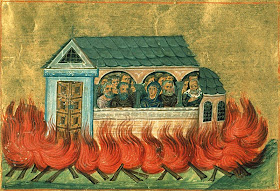 
HYMN OF PRAISE: The Twenty Thousand Holy Martyrs of Nicomedia
By St. Nikolai Velimirovich
Holy Martyrs, your sufferings have passed,
Your tears wiped away, your wounds healed.
But more suffering still comes, it has not all arrived
Upon God's Church and upon her faithful.
Holy Martyrs, to you we pray:
By your prayers, watch over the Church.
Holy Martyrs, wonderful conquerors,
Against you have risen all the diabolical legions.
As great soldiers, you were without fear;
Your adversaries fell into the abyss.
You now clearly behold the Holy Trinity;
In His light you rejoice.
Holy Martyrs, we praise you for your wounds,
And for your tears and for your pure blood.
You became a fortress of defense for the Church.
Pray for us to the Savior Christ,
To make us worthy to call you brothers,
O honorable knights, children of grace!
Apolytikion in the Second Tone
Blessed is the earth that drank your blood, O prizewinners of the Lord, and holy are the tabernacles that received your spirit; for in the stadium ye triumphed over the enemy, and ye proclaimed Christ with boldness. Beseech Him, we pray, since He is good, to save our souls.
Kontakion in the First Tone
A twenty-thousand numbered battalion of Martyrs ariseth like an unwaning star great with brightness, enlight'ning by faith the hearts and the minds of all godly folk. For, enkindled with divine love unto the Master, this courageous host received a sanctified ending when eagerly burned with fire.
John at 9:55:00 AM
Share
‹
›
Home
View web version