Why The Filioque Is A Heresy 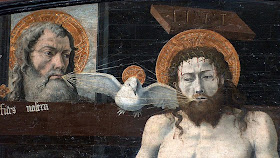 Today, the Latins are obliged, if they wish to revise the foundation of their theology, not only to take seriously the theology of the Fathers, which constituted the basis of the decisions of the First and Second Ecumenical Councils, but also to revise the Trinitarian terminology, which is based on Augustine's doctrine.