The True Origins of the Jack O' Lantern 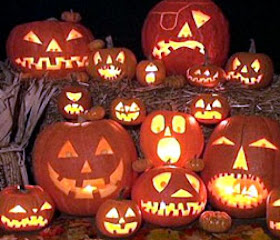 First of all, there is absolutely no evidence behind the alleged pagan use of the Jack O' Lantern, where it is said in modern fundamentalist folklore that they were invented to ward-off evil spirits. In fact, the carved lanterns had practical military use in Ireland and Britain simply as carved lanterns. And stories of Stingy Jack are a later invention.

Despite the colorful legends, the term jack-o'-lantern originally meant a night watchman, or man with a lantern, with the earliest known use in the mid-17th century; and later, meaning an ignis fatuus or will-o'-the-wisp. In Newfoundland and Labrador, both names "Jacky Lantern" and "Jack the Lantern" refer to the will-o'-the-wisp concept rather than the pumpkin carving aspect.

Throughout Ireland and Britain, there is said to be a tradition of carving lanterns from vegetables, particularly the turnip, mangelwurzel, or swede.[1] But not until 1837 does jack-o'-lantern appear as a term for a carved vegetable lantern,[2] and the carved lantern does not become associated specifically with Halloween until 1866.[3] Significantly, both occurred not in Ireland or Britain, but in North America. Historian David J. Skal writes,

"Although every modern chronicle of the holiday repeats the claim that vegetable lanterns were a time-honored component of Halloween celebrations in the British Isles, none gives any primary documentation. In fact, none of the major nineteenth-century chronicles of British holidays and folk customs make any mention whatsoever of carved lanterns in connection with Halloween. Neither do any of the standard works of the early twentieth century."[4]

In the United States, the carved pumpkin was first associated with the harvest season in general, long before it became an emblem of Halloween.[5] The poet John Greenleaf Whittier, who was born in 1807, wrote "The Pumpkin"  in 1850, in which he mentions the American tradition of pumpkin carving with no association with Halloween:[6]

"Oh!—fruit loved of boyhood!—the old days recalling,
When wood-grapes were purpling and brown nuts were falling!
When wild, ugly faces we carved in its skin,
Glaring out through the dark with a candle within!"

So now that you have the real and less eventful history of the carved pumpkin apart from the folklore and myth, you can carve your own pumpkin conscience-free at the following site: http://www.theoworlds.com/halloween/

1. They continue to be popular choices today as carved lanterns in Scotland and Northern Ireland, although the British purchased a million pumpkins for Halloween in 2004. "Pumpkins Passions", BBC, 31 October 2005. "Turnip battles with pumpkin for Hallowe'en", BBC, 28 October 2005.

"Hide it [the great carbuncle] under thy cloak, say'st thou? Why, it will gleam through the holes, and make thee look like a jack-o'-lantern!"

"The old time custom of keeping up Hallowe'en was not forgotten last night by the youngsters of the city. They had their maskings and their merry-makings, and perambulated the streets after dark in a way which was no doubt amusing to themselves. There was a great sacrifice of pumpkins from which to make transparent heads and face, lighted up by the unfailing two inches of tallow candle."

"It is an ancient Scottish custom to light great bonfires on Halloween, and carry blazing fagots about on long poles; but in place of this American boys delight in the funny grinning jack-o'-lanterns made of huge yellow pumpkins with a candle inside."