Saint Andronikos and His Wife Athanasia 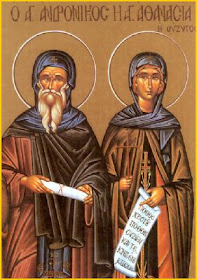 
Saint Andronikos and his wife Athanasia of Egypt lived in Antioch in the fifth century. St Andronikos was a craftsman who divided his earnings into three portions. One part he gave to the Church, the second to the poor, and the third he used for his family. When the Lord took the son and daughter of Andronikos and Athanasia, the pious couple decided to devote themselves fully to the service of God, helping the poor and the sick. Soon the saintly spouses set out for Alexandria, where Andronikos entered a skete monastery, and Athanasia entered the women's Tabennisiota monastery.

After twelve years of ascetic life St Andronikos went to Jerusalem to pray at the holy places. He met a co-pilgrim, St Athanasia, who, foreseeing the difficulties of the journey, had donned men's attire. They did not recognize each other, since long ascetic effort had altered their appearance. When they returned from Jerusalem, both monks settled into a single cell and for many years lived the ascetic life in silence. St Athanasia wrote a note to be read after her death, revealing her secret. St Andronikos died soon after St Athanasia.


From A Sermon By St. Kosmas Aitolos
"Don't you see in the menologion, on the ninth of October, which contains the lives of St. Andronikos and St. Athanasia, what a struggle they had? What fortunate people they were!

There was a couple who had two children. The most gracious God wanted to test them, so one day he took their two children from them. What did the blessed couple do, my brethren? Immediately they divided their possessions and both entered monasteries. They lived well and in peace here, and went to Paradise to rejoice forever with their fortunate children."