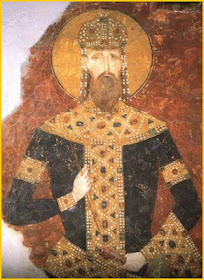 
Saint Stephen was the younger son of King Stephen Urosh I, and grandson of First-Crowned King St Stephen (September 24). He ruled Serbia from 1275 to 1320. Stephen Milutin received the throne from his elder brother Dragutin, a true Christian, who after a short reign transferred power over to his brother, and he himself in loving solitude withdrew to Srem, where he secretly lived as an ascetic in a grave, which he dug with his own hands. During his righteous life, St Dragutin toiled much over converting the Bogomil heretics to the true Faith. His death occurred on March 2, 1316.

St Stephen Milutin, after he became king, bravely defended, by both word and by deed, the Orthodox Serbs and other Orthodox peoples from their enemies. St Stephen did not forget to thank the Lord for His beneficence. He built more than forty churches, and also many monasteries and hostels for travelers. The saint particularly concerned himself with the Athonite monasteries.

When the Serbian kingdom fell, the monasteries remained centers of national culture and Orthodoxy for the Serbian nation. St Stephen died on October 29, 1320 and was buried at the Bansk monastery. After two years his incorrupt relics were uncovered.

A Reflection of St. Nikolai Velimirovich

A great son of the Orthodox Church, King Milutin saved the Balkans from Uniatism. At that time in history when the Byzantine emperor's conscience was weakened, this noble and God-bearing Slavic king rose up decisively and, with God's help, saved Orthodoxy-not only in his own land, but also in all the lands of the Balkans. He who closely examines the life of the holy King Milutin will understand why God gave him success after success in all his works throughout his life. When Milutin ascended the throne, he immediately vowed to God that he would build a church for each year that he would reign. He reigned forty-two years and built forty-two churches. Next to some of the churches - for example, in Thessalonica and Constantinople - he also built hospitals for the indigent, where the poor would receive everything free of charge. Beyond that, he especially loved to give alms to the needy from his own enormous wealth. Oftentimes, this powerful and wealthy king dressed in the clothes of a poor man, and seeing the foolish extravagance of the princess and her retinue, said: "What is this, and what is it for? We are not used to such a life." And pointing to a Serbian princess with a distaff in her hand, he said: "Behold, this is the kind of clothing we expect our daughter-in-law to wear."


HYMN OF PRAISE: The Holy King Milutin
By St. Nikolai Velimirovich
The saint of God, Milutin the gallant,
Had a great and difficult task:
To defend the Faith against evil schismatics,
And the people against many cruel tyrants.
He was a scourge to Palaeologus, and a scourge to the Latins-
Milutin triumphed over all the unbelievers.
The Orthodox Faith was his great treasure,
As it was Justinian's crown of pearls!
And, like Justinian, he built many churches,
And raised up glory to the glorious Christ throughout the world.
Royally he attended to matters imperial,
But his mind was not parted from Christ God.
Thus, pure and innocent in heart was he,
A venerable mind in the whirlpool of the world.
God, Who looks at the heart and judges accordingly,
Granted King Milutin immortality-
Immortality of soul, and an incorrupt body.
And lo, our holy king, even now, is intact!
As you fear no man, O wondrous King,
Be our defender before the Living God,
That he forgive our sinful monstrosities,
And vouchsafe us, with you, the Heavenly Kingdom.
John at 9:12:00 AM
Share
‹
›
Home
View web version