Saint Demetrios and the Earthquake of 1978 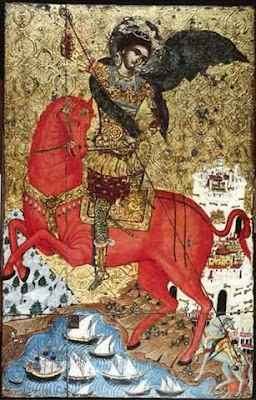 Saint Demetrios has proven himself to be a protector of the city of Thessaloniki, working countless miracles and appearing to many people who were in need of his aid.

For example, in 1912, when Thessaloniki was liberated from the Turks, many people claimed to have seen St. Demetrios.

As recently as 1978, during the earthquake that caused considerable destruction, many Thessalonians reported seeing St. Demetrios in the sky on a red horse. As the earthquake subsided, a group of bystanders saw a young man in a long white robe standing atop St. Demetrios' Church. Thinking it was one of the priests or an acolyte and fearful that the roof would collapse, they called to him to come down, but he disappeared from their sight. They ran inside the church and up to the roof to investigate, but none of the clergy or church workers had been up there. A general belief spread throughout the city that it had been the Saint. 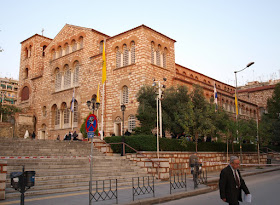