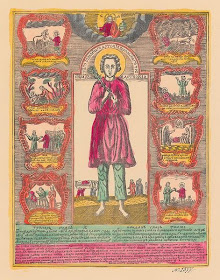 
Artemius was born in 1532 to the pious Kosma and Apollinaria, in the village of Verkola (on the banks of the Pinega River, Dvinsk District). He was brought up in God-fearing Christian piety. By the time he was five years of age, he had begun to distance himself from childish habits: he did not enjoy playing games, was quiet, meek, God-fearing, and was obedient to his parents, assiduously helping his father at the farm as much as he could at his age.

One day, at the age of 12, Artemius accompanied his father into the fields. Without warning, there was a clap of thunder and a lightning bolt struck the boy, and he fell dead. This took place on June 23, 1545. Superstition about the bad omen of such an untimely death kept Artemius from being granted a proper funeral and burial. His body was placed in a small clearing in the woods, without being buried in the ground. A wooden shell was constructed over it, and a fence was built around it. In time the boy would no doubt have been forgotten, but it pleased God to reveal him to the world as a wonderworker equal in honor to some of the great ascetics.

Thirty-two years after Artemius' tragic death in 1577, one of the local deacons, by the name of Agafonik, was gathering wild berries when he saw a light emanating from the place where the youth's body had been laid. The deacon came closer and saw to his astonishment that the body of the boy showed no signs of decay; it looked, in fact, as if the boy were simply sleeping. Above the boy was a radiant light. The deacon hurried to the nearest village and told the priest and the local peasants what he had discovered. They all went to see for themselves and found it just as the deacon had described. The peasants brought St. Artemius’ body to the courtyard before the Church of St. Nicholas. 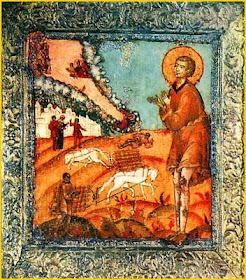 It had been a terrible year for the whole region. A bad flu epidemic was going around; some people had already died. The son of one of the peasants in Verkola, Kallinik, was sick with it. Seeking relief for his son, Kallinik prayed fervently to the Lord Jesus Christ, to the Most Holy Virgin, to Saint Nicholas, and to the young Artemius. He venerated the youth's relics and took a piece of the birch-bark covering the coffin. Coming home, he put this piece of birch-bark on his son's chest, and the boy immediately recovered. The father related the miracle to the other villagers, who similarly took pieces of birch-bark and placed them on the sick in their households. These, too, were healed, and soon there was no trace of the epidemic.

Through the prayers of the Saint, many sick people received healing, especially those who suffered from ocular disorders. A certain Hilarion, a resident of Kholmogor, had lost his sight and become despondent. On the Feast Day of St. Nicholas the Wonderworker, Righteous Artemius, holding a staff in his left hand and a Cross in his right, appeared to the suffering man. Making the sign of the Cross over him with the Cross, he said, “Arise, Christ heals you by the hand of His servant Artemius. Go to Verkola, bow down before his coffin, and relate everything to the priest and to the peasants.” The sick man was immediately healed.

In 1584, thankful people who revered the venerable youth transferred his relics from the church courtyard to a side-chapel which had been especially prepared for them. In thanks for the healing of his son, Afanassy М. Pashkov, military commander of Monzensk, erected a church to Holy Great Martyr Artemius, heavenly patron of the righteous youth. On December 6, 1619 St. Artemius' holy relics were uncovered, and transferred to that church. Thirty years later, after that church burned down, the relics were again found. In 1649, during the reign of Tsar Alexei Mikhailovitch, a monastery was erected on the site, and the Saint’s relics were transferred to it. 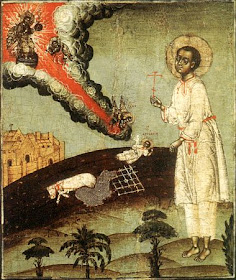 God glorified the righteous one’s relics through miracles, and in 1639, Metropolitan Cyprian of Novgorod the Great issued a directive that “the local and area abbots, priests and deacons document [those miracles].” An account of the healings was prepared and presented to the Metropolitan. The following year, the Metropolitan issued a “full festal service to celebrate the Righteous Artemius: sticherae, magnification, a litya, aposticha, troparion, kontakion, and ikos, hymn of light, and praises, and banner chant sheet music.”

In 1918, the impious Soviets chopped the holy relics into pieces and threw them into a well, earning his title of Martyr.

Philip Zimmerman, an iconographer living in Johnstown, Pennsylvania, was granted a vision of St. Artemius. Phil was told to paint his icon "for all children." With the blessing of Fr. John Namie, the Director of the Antiochian Village at the time, a site was selected on which to build a rock shrine to house the finished icon. The shrine stands to the right of the entrance to the St. Ignatius Church.

According to tradition, St. Artemius had a sister — the Righteous Paraskeva of Pirimin (Oct. 28) — who also gained renown as a worker of miracles. 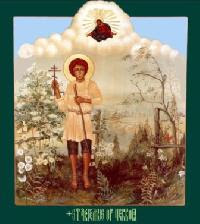 Troparion to St. Artemius
By the command of the Most High, the sky was darkened with rain clouds, lightning flashed, threat'ning thunder clashed, and you gave up your soul into the hands of the Lord, O Artemius most wise. Now as you stand before the Throne of the Lord of All, you grant healing unfailingly to those who come to you with faith and love, and you pray to Christ our God that our souls may be saved.
John at 11:04:00 AM
Share
‹
›
Home
View web version