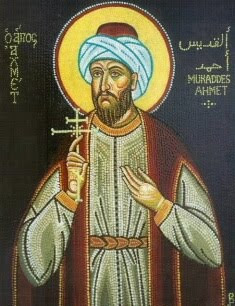 St. Ahmed (Ahmet) the Calligrapher (Feast Day - December 24 and May 3)

"The greatest of all things is faith in Jesus."
Crying this, O Ahmed, you receive a great crown.


The Holy New Martyr Ahmed was from Constantinople, having been reared in the ungodliness of the Muslims by his parents. By profession he was a copyist in the Great Archives. In accordance with Ottoman law, since he did not have a wife, he had a slave instead, a Russian woman. Another captive from Russia lived together with her, an old woman, also a slave. Both these women were very pious.1

On feast days the old woman would go to church. Taking the blessed bread, or antidoron,2 she would give it to the young woman to eat. The old woman would also bring her holy water to drink. Whenever this occurred and Ahmed was close to her, he would smell a beautiful and indescribable fragrance coming out of her mouth. He would ask her what she was eating to make her mouth smell so fragrant. Not realizing what was happening, the slave would say that she was not eating anything. However, he persisted in asking. Eventually she told him that she was eating the bread which had been blessed by the priests, which the old woman brought her whenever she returned from church.

On hearing this, Ahmed was filled with longing to see the Orthodox church and how Orthodox received this blessed bread. Therefore he summoned a priest and told him to prepare a secret place for him, so that he could go when the Patriarch3 was serving the Liturgy. When the appointed day arrived, dressed as a Christian,4 he went to the Patriarchate and followed the Divine Liturgy. While he was in church, he saw the Patriarch shining with light and lifted off the floor, as he came out of the altar and through the holy doors to bless the people. As he blessed, rays of light came from his finger tips, but though the rays fell on the heads of all the Christian, they did not fall on Ahmed’s head. This happened two or three times and each time Ahmed saw the same thing. Thus, Ahmed came to the faith. Without hesitation he sent for the priest, who gave him rebirth through baptism. Ahmed remained a secret Christian for some time.5 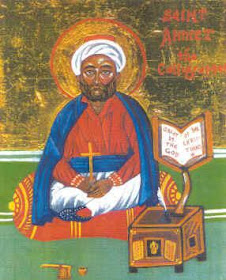 However, one day Ahmed and certain noblemen were eating together. Afterwards they sat talking and smoking the narghile,6 as is the custom. In the course of the conversation they began to discuss what was the greatest thing in the world. Each gave his opinion. The first guest said that the greatest thing in the world was for a man to have wisdom. The second maintained that woman was the greatest thing in the world. And yet a third said that the greatest thing in the world, and by far the most delightful, was pilaf with yogurt – for was this not the food of the righteous in paradise?
Then it was Ahmed’s turn. They all turned to him, asking him for his opinion on this matter. Filled with holy zeal, Ahmed cried out that the greatest thing of all was the Faith of the Christians. And confessing himself to be a Christian, he boldly censured the falseness and deception of the Muslims. At first, on hearing this the Muslims were aghast. Then, filled with unspeakable rage, they fell on the holy martyr and dragged him to a judge, so that he could be sentenced to death. Thus he received the crown of martyrdom, being beheaded by command of the ruler on the third day of May in the year 1682, at the place called Kayambane Bahche. Such was the blessed end of the Holy New Martyr, through whose holy prayers may we be deemed worthy of the Kingdom of God. Amen.
Notes:

1. Regarding the spiritual condition of Christian slave women who were held as concubines by their masters, St. Basil the Great in his 49th Canon states: "A slave girl violated by her own master is free from responsibility." St. Gregory the Wonderworker in his 2nd Canon states: "If, however, it is found that any particular one of them has lived a life of the utmost sobriety, and that her previous life has been pure and above suspicion, but that she has now fallen as a result of violence and necessity a victim of insult, we have the example to be found in Deuteronomy, 'Unto the damsel thou shalt do nothing; there is in the damsel no sin worthy of death...'"

2. Bread that is blessed during the Divine Liturgy, but not consecrated for the Holy Eucharist.

4. Christians were forced to wear dull and drab clothing while the Muslims wore rich, illustrious garments, in this way trying to signify that Islam was "bright" and "luminous" compared to Christianity.

5. Crypto-Christians were common during the Ottoman occupation, especially by Muslims who converted to Christianity since the Koran itself says that apostasy from Islam deserves death. Cryptochristians can still be found in predominantly Muslim countries. It is for this reason also that we do not know the Christian name of Saint Ahmed.

6. A smoking apparatus used in Turkey and the Middle East, the smoke being drawn through water. 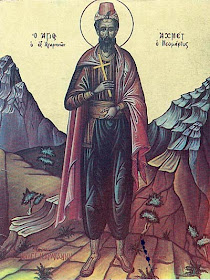