The Parthenon and the Theotokos 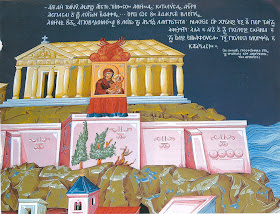 Few people realize that the Parthenon existed as a Christian Church for most of its existence, between approximately the 5th - 15th century AD. It was dedicated at first to Hagia Sophia, or the Holy Wisdom of God, but soon after was dedicated to the Virgin Mary and bore the name Panagia Atheniotissa. It was also one of the most popular Christian pilgrimage sites during this time. The Christians found no need to destroy it, as many unbelievers would assume and have falsely read into Christian history, but they transformed it to the glory of God. And not only was the Parthenon a Christian Church, but the Propylaea housed the bishop of Athens.

Following the Fourth Crusade in 1204 the Franks took the Parthenon over and built a bell tower next to it, dedicating it to Notre Dame. In 1458 the Parthenon was turned into a mosque for a few hundred years before it was destroyed and came to ruins.

Read more on this history of the Acropolis here and here.
John at 3:28:00 PM
Share
‹
›
Home
View web version