An Orthodox Response To The Fatima Appearances 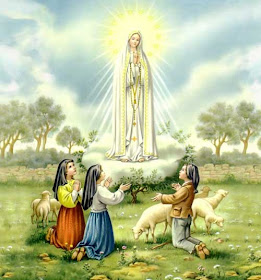 On 13 October 1917, a day of pouring rain, a crowd of seventy thousand people assembled at the Cova, expecting the promised miracle. According to a Roman Catholic priest, they were highly excited, kneeling, weeping and praying. The Lady appeared, announcing that she was Our Lady of the Rosary and that the war would end that day (in fact it did not end till thirteen months later). Then she disappeared and the famous "miracle of the sun" took place. The rain had ceased, and when Lucia cried out "Look at the sun!" (in which she claimed to see in turn Our Lady of Sorrows, Our Lady of Mount Carmel, St Joseph with the Holy Child, and Our Lord), the crowd stared at the sun which appeared to spin, give out coloured rays, zigzag from east to west, fall towards the earth—making those present fear that it was the end of the world,—and return to its place. This was not seen by everyone in the crowd, although some people ten kilometres from Fatima saw it. Other reported solar phenomena, both during the period of the apparitions and afterwards, were a sun casting rainbow-coloured light over everything, a "luminous globe," a "night-time star" and a "rain of flowers" (similar to the "rain of roses" following the death of Therese of Lisieux, the Little Flower).

For a detailed Orthodox Christian response to the event above, read the following:

The Appearances of Fatima and Orthodox Christianity