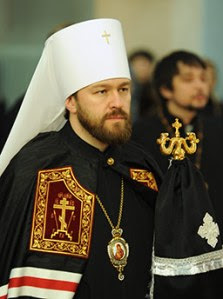 In an interview to Patriarhia.ru, the head of the Department for External Church Relations, Metropolitan Hilarion of Volokolamsk, sums up the work of the Joint Commission of Orthodox-Catholic Dialogue meeting in Vienna and the Inter-Council Presence’s commission for opposing and overcoming church schisms, and speaks about the state of inter-Christian dialogue today.

In the interview he was asked the following question regarding the recognition of schismatic Sacraments and he answered in turn:

- Did you discuss the recognition of ‘sacraments’ administered by schismatics? What is your attitude to this issue?

- This issue has been repeatedly discussed both in private talks of the Commission members and at the meeting. The Church does not recognize and cannot recognize as grace-giving and salvific any ‘sacraments’ including Baptism administered in a schism. This is a common point of view confirmed by many testimonies of the church Tradition. ‘Recognition of schismatics’ sacraments’ is an altogether improper expression which can be only misleading. The point here is not a diplomatic manifestation of politeness but attempts to impose on the Orthodox the recognition of a real presence of saving grace outside the Church. For the Church, the authenticity of Sacraments is a matter of salvation. It is impossible and senseless to speak of ‘recognition of sacraments’ administered by schismatics who stay outside the Church and have no communion with her.

However, as His Beatitude Vladimir, Metropolitan of Kiev and All Ukraine, has stressed, ‘the schismatics’ return to the saving fold of the Church can put life into their graceless actions’. When schismatics come back to the Church, it is a normal practice to embrace holy Baptism. But if the Church deems it necessary and if it is helpful for healing a schism, she can in some cases provide a different procedure, as was the case on repeated occasions in history.

The Church will never recognize schismatics’ ordinations, and all the clergy who come back from a schism should be ordained, though it is not at all necessary to make it in public. As far as the Sacrament of Baptism is concerned, it is impossible to administer it to all the laity coming back from a schism. Indeed, some of them do not even remember in which church they were baptized, canonical or schismatic.

Besides, there are situation where, for instance, a schismatic priest comes back to the Church together with his parishioners. The subsequent ‘re-baptism’ of the parishioners he had baptized earlier cannot be stipulated for his return, just as a ‘re-marriage’ of those whom he had married earlier or ‘re-funeral’ of all the dead over whom the burial service had been said before. It is impossible to force a priest who was now ordained in a canonical Church to return to their parishioners and say to them: ‘Everything I have done here for ten (or twenty) years was a deception, and only now I will begin doing everything in the real way’. People will not understand it and will not believe him. For all I know, they can think he decided to get the money for the second time for the sacraments he had already administered.

It is about such situations that it is stated that the Church can breathe a grace-giving power into the graceless actions of the schismatics and to inform with grace what had been only an empty and graceless form. In other words, the question of recognizing schistatics’ sacraments is not posed at all out of context of their return from the schism. But the question of a procedure of acceptance form a schism can and must be posed. And here, depending on the situation, various approaches can be applied.

- We hear sometimes the voices of the so-called ‘zealots of the purity of Orthodoxy’, whose favourite theme is criticism of ‘ecumenism’ based on conjecture. What does inter-Christian cooperation consist in today?

- The Supreme Authority of the Russian Orthodox Church has repeatedly explained what is understood as inter-Christian cooperation, what aims this cooperation pursues, what results it has brought and can bring to our Church in the future. I believe there is no sense in repeating all that has been said about it, for instance, in the Russian Orthodox Basic Principles of Attitude to Non-Orthodoxy, an official document of the 2000 Bishops’ Council.

I would like to mention a different thing. Today, millions of the faithful of the Russian Orthodox Church including Russians, Ukrainians, Byelorussians, Moldovans, have gone to live outside their historical Motherland. It is a sad development in many ways as it involves assimilation, brain drain, etc. But it is a reality existing regardless of its emotional assessment. One can grieve over it as much as one wants but the Church is obliged to help her children to remain Orthodox in an alien milieu.

I wonder whether anyone of the ‘zealots’ has ever been concerned for the problems of pastoral care of the Russia diaspora? Do the critics of our cooperation with the Catholic Church know who actually provides our compatriots abroad with facilities necessary for services, Sunday schools and for creating an Orthodox environment for fellowship? Many newly-established Orthodox communities abroad use church buildings which have been provided by the non-Orthodox, in the first place, Catholics. When Catholics give the Orthodox an opportunity to pray in the churches which belong to them and do it often gratis, what does it show?

And how many of former Catholics and Protestants have become Orthodox Christians and members of our communities abroad, among other things, as a result of mixed marriages? Do the authors who claim to be the voice of ‘conservative church public’ know how difficult it is in Western Europe, for instance, to obtain permission for building a church and to negotiate its design with local authorities? And what assistance do Catholic parishes and sometimes even Protestant communities give to our new parishes? And how many of our compatriots who have found themselves in the West in a situation of illegal migrants have managed to obtain the necessary papers and jobs with the help of Catholic and Protestant charities on the request of Russian Orthodox parishes?