The Linguistic and Etymological Origins of "Fanaticism" 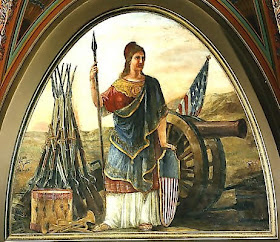 Where Schwärmerei denotes confusion, unrealism, and a menacing multitude, a swarm, while enthusiasm (Enthusiasmus, enthousiasme) evokes a divine inspiration that finds its Greek sources in Plato's philosophy, fanaticism proper (Fanatismus, fanatisme) derives from the Roman term fanum, referring to a consecrated place (the opposite of this being the profane, and the act of disrespecting the fanum, profanation). In particular, fanatici was the name given to the followers of the Cappadocian goddess Comana, introduced to Rome as Bellona.

"In celebrating the festival of the goddess they marched through the city in dark clothes, with wild cries, blowing trumpets, beating cymbals and drums, and in the temple inflicting wounds upon themselves, the blood from which they poured out as an offering to the goddess."

Without engaging in genealogical fallacies -- as we'll see there are many uses of fanaticism that bear little relation to this cultic model -- in this origination we can see the sign not just of an inaugural link with religion, but of a preoccupation with the religion of the other (Bellona was not the state cult, but had been brought back by legionaries from their Anatolian campaigns) and with unchecked violence.

The description of the cult's vital by a Roman contemporary foreshadows many of the portraits of indomitable religious 'fanatics', from Canetti's account of the Persian Muharram in Crowds and Power to Voltaire's tableau of theological possession in the Dictionnaire Philosophique:

"Once set in motion by the transports of Bellona, in her frenzy she fears neither the heat of the fire nor the blows of the whip. With a double-edged hatchet, she violently wounds her arms, sprinkling the goddess with blood, yet feeling no pain. Standing, her side pierced by a dart, she prophesies events which the powerful goddess makes known to her."

It is from the Roman Empire too that a frequent synonym for fanatic, zealot, derives. This was a specifically political term, deriving from the religiously motivated Jewish resistance against colonial Rome in Palestine. In terms redolent of two millennia of counter-insurgency literature, Josephus, chronicler of the Jewish rebellion, speaks of nationalist and spiritual enthusiasm as a surrogate for military weakness, of "animal courage for which no numbers were a match", of men joining battle "with their passions in command".