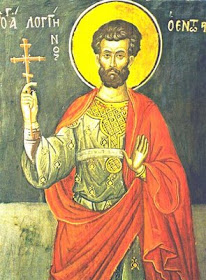 
Verses
Prior to his beheading Longinus once again,
Called on you O Christ as the Son of God.
On the sixteenth Longinus was slaughtered with the sword.
By St. Nikolai Velimirovich
The divine Matthew the Evangelist, in describing the passion of the Lord Jesus Christ, says: "Now when the centurion, and they that were with him, watching Jesus, saw the earthquake, and those things that were done, they feared greatly, saying, 'Truly this was the Son of God'" (Matthew 27:54). That centurion was this blessed Longinus, who with two other of his soldiers came to believe in Jesus, the Son of God.

Longinus was chief of the soldiers who were present at the Crucifixion of the Lord on Golgotha, and was also the chief of the watch that guarded the tomb. When the Jewish elders learned of the Resurrection of Christ, they bribed the soldiers to spread the false news that Christ did not resurrect, but rather that His disciples stole His body. The Jews also tried to bribe Longinus, but he did not allow himself to be bribed. Then the Jews resorted to their usual strategy: they decided to kill Longinus. Learning of this, Longinus removed his military belt, was baptized with his two companions by an apostle, secretly left Jerusalem and moved to Cappadocia with his companions. There, he devoted himself to fasting and prayer and, as a living witness of Christ's Resurrection, converted many pagans to the true Faith by his witness. 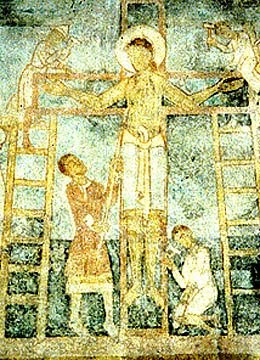 After that, he withdrew to a village on the estate of his father. Even there, however, the malice of the Jews did not leave him in peace. Due to the calumnies of the Jews, Pilate dispatched soldiers to behead Longinus. St. Longinus foresaw in the spirit the approach of his executioners and went out to meet them. He brought them to his home, not telling them who he was.

He was a good host to the soldiers, and soon they lay down to sleep. But St. Longinus stood up to pray, and prayed all night long, preparing himself for death. In the morning, he called his two companions to him, clothed himself in white burial clothes, and instructed the other members of his household to bury him on a particular small hill. He then went to the soldiers and told them that he was that Longinus whom they were seeking. The soldiers were perplexed and ashamed, and could not even contemplate beheading Longinus, but he insisted that they fulfill the order of their superior.

Thus, Longinus and his two companions were beheaded. The soldiers took Longinus's head to Pilate, and he turned it over to the Jews. They threw it on a dung heap outside the city. 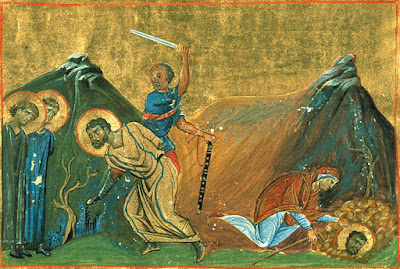 Two Appearances of St. Longinus
The first appearance of the Holy Martyr Longinus was as follows: Much time had passed since his martyrdom when it happened that a widow in Cappadocia became blind. The doctors were unable to do anything at all for her. Suddenly, the thought came to her to go to Jerusalem and venerate the holy places there, hoping that she might find help. She had an only son, a boy, who served as her guide, but as soon as they arrived in Jerusalem, her son died of an illness. Oh, how immeasurable was her sorrow! Having lost her eyes, she now lost her only son, whose eyes had guided her. But in her pain and sorrow, St. Longinus appeared to her and comforted her with the promise that he would restore her sight and reveal to her the heavenly glory in which her son now dwelt. Longinus told her everything about himself, and told her to go outside the city walls to the dung heap, and there to dig up his head, and that she herself would see what would happen next. The woman arose and, stumbling, somehow managed to get out of the city. She cried out for someone to lead her to the dung heap and to leave her there. When she was led to the dung heap, she bent down and began to dig with her hands, having a strong faith that she would find that for which the saint asked. As she was digging, she touched the holy martyr's buried head, and her eyes were opened, and she saw a man's head beneath her hands. Filled with gratitude to God and great joy, she took the head of St. Longinus, washed it, censed it, and placed it in her home as the most precious treasure on earth.

The second appearance of the Holy Martyr Longinus: When Longinus appeared to the blind widow whose son had died, he promised to restore her sight and to reveal her son in great glory. Finding the relics of the holy martyr and touching them with her hands, the widow immediately regained her sight, and thus, one promise was fulfilled. The following night, St. Longinus appeared to the widow in radiant attire, holding her son by the hand, who was also clothed resplendently. Caressing the child like a father, Longinus said: "Woman, behold your son for whom you weep so much! Look at the honor and glory given him; look and be comforted. God has numbered him among the heavenly ranks who live in His Kingdom. I have now brought him from the Savior, and he will never be parted from me. Take my head and your son's body, and bury them together in one coffin. Mourn your son no longer, and let not your heart be troubled, for great glory, joy, and endless rejoicing is given him from God." Seeing and hearing all this, the woman was filled with great joy, and she returned to her home, saying to herself: "I asked for bodily eyes and I found spiritual eyes. I was saddened at the death of my son, and now I have him in heaven, where he remains in glory with the prophets and rejoices with them unceasingly." 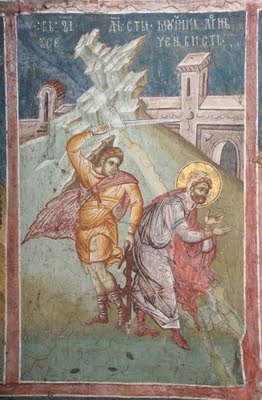 St. Longinus stood beneath the Cross
When, on the Cross, Christ breathed His last.
Longinus beheld the wrath of the mild sky,
Witnessed the earth as it shook,
And the bright sun as it lost its rays
And clothed the whole world in darkness.
The tombs of many were opened,
And many of the dead appeared alive.
Brave Longinus was filled with fear,
And exclaimed with a remorseful sigh:
"This Man was the Son of God!
Sinful men have crucified the Innocent One!"
Next to him, two other soldiers
Echoed the exclamation of their centurion.
Longinus was a witness of the Resurrection,
And he could attest to His humiliation as well.
An eyewitness, a true witness,
Longinus desired to not conceal the truth,
But proclaimed it everywhere he went,
And glorified the resurrected Christ God!
To his death he remained Christ's soldier;
And for Christ, Longinus gave his head. 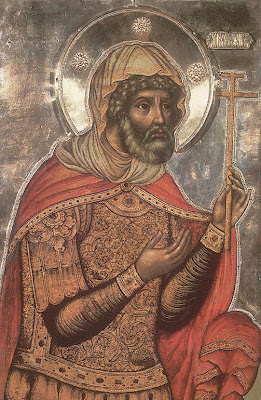 Apolytikion in the First Tone
Longinus, you beheld the King of Glory who was nailed to the Cross, yet shone on those in darkness. You were enlightened by His rays and became a martyr and save those who cry: Glory to Him who gave you strength! Glory to Him who granted you a crown! Glory to Him who through you grants healing to all!

Kontakion in the Fourth Tone
With great joy the Church of Christ today rejoiceth on the festive memory of blest Longinus, the all-famed and godly prizewinner. And she doth cry out: O Christ, my foundation and might art Thou.