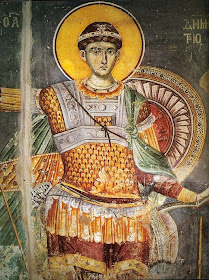 This glorious and wonderworking saint was born in Thessalonica of noble and devout parents. Implored of God by childless parents, Demetrius was their only son, and so was raised and educated with great care. Demetrius's father was a commander in Thessalonica.

When his father died, Emperor Maximian appointed Demetrius as commander in his place. As he appointed him, Maximian, an opponent of Christ, particularly recommended that he persecute and exterminate the Christians in Thessalonica. Demetrius not only disobeyed the emperor but openly confessed and preached the Lord Jesus Christ in the city of Thessalonica. When the emperor heard of this he became furious with Demetrius. Then, when he was returning from battle against the Sarmatians, Maximian stopped at Thessalonica to investigate the matter.

The emperor summoned Demetrius and questioned him about his faith. Demetrius openly acknowledged his Christian Faith to the emperor and also denounced the emperor's idolatry. Maximian cast Demetrius into prison. Knowing what was awaiting him, Demetrius gave all his goods to his faithful servant Louppos to distribute to the poor, and joyfully awaited his imminent suffering for Christ the Lord.

An angel of God appeared to him in prison, saying: "Peace be to you, O sufferer of Christ; be brave and be strong!" After several days, the emperor sent soldiers to the prison to kill Demetrius. The soldiers found the saint of God at prayer and ran him through with lances. Christians secretly took his body and honorably buried it. Healing myrrh flowed from the body of the martyr of Christ, curing many of the sick. Soon, a small church was built over his relics.

An Illyrian nobleman, Leontius, was afflicted with an incurable illness. He hastened, with prayer to the relics of St. Demetrius and was completely healed. In thanksgiving, Leontius erected a much larger church on the site of the old church. The saint appeared to him on two occasions.

When Emperor Justinian wanted to translate the relics of the saint from Thessalonica to Constantinople, flaming sparks sprang from the tomb and a voice was heard: "Stop, and do not touch!" And thus, the relics of St. Demetrius have remained for all time in Thessalonica. 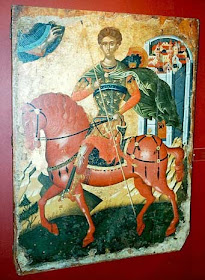 Miracle One of St. Demetrius of Thessalonica

Demetrius was a commander of Thessalonica during his life and remained so after his repose. People have felt his presence in Thessalonica, especially in times of great calamities. He protects the city, wards off misfortunes, repels invaders, and helps all who invoke his name.

Here is a wonderful example of his unusual aid to people in need.

Once, the barbarians attacked Thessalonica and were unable to overtake it. Infuriated at this, they pillaged the countryside and bound and carried off two beautiful maidens whom they gave as a gift to their prince. These maidens knew how to embroider well. When the prince saw their handiwork, he said to them: "I hear that there is a great god in your land, Demetrius, and that he works great miracles. Embroider his face on this linen." The maidens told him that St. Demetrius was not a god but rather God's servant and the helper of Christians. At first, they refused to embroider the face of the saint, but when the prince threatened them with death, they carried out the command and completed the task by St. Demetrius's Day. On the eve of the feast, they looked at their embroidery and wept sorrowfully, as they had to spend the feast day in slavery and had to give that embroidered image of their beloved saint to an impious barbarian. Both maidens prayed to St. Demetrius to forgive them. Then St. Demetrius appeared to them and took them both away, as an angel had once taken the Prophet Habakkuk. He brought them to Thessalonica and set them in his church. A solemn all-night vigil was being celebrated, and many people were there. When they learned of the miraculous rescue of these Christian maidens, all glorified God and St. Demetrius, His great servant and commander.

That the saints of God live, clothed in great glory and might in the heavens, Orthodox Christians know, not by their own reasoning, but by the true help and visitations of the saints. At times the saints appear so that men may see and hear them; at times, only to be either seen or heard; at times, though unseen and unheard, they influence our thoughts, our dispositions and our actions.

Among the many miracles of St. Demetrius in Thessalonica the following is recorded:

A young man named Onesiphorus was appointed to the service of sacristan in the Church of St. Demetrius of Thessalonica. His primary task was to keep an account of the candles and lampadas. This young man began to steal candles, take them home, and then resell them. St. Demetrius appeared to him and said: "Brother Onesiphorus, your action is not pleasing to me, for you are stealing candles. By this, you bring harm to others and especially to yourself. Cease doing this and repent!" Onesiphorus was frightened and ashamed and, for a time, stopped stealing candles. But he eventually forgot himself, and again began to steal candles. One morning, a distinguished man brought some large candles to the tomb of the saint, lit them, prayed and left. Onesiphorus approached the candles and stretched forth his hand with the intention of taking them, but at that moment a voice like thunder roared: "Are you doing that again?!" As though struck by lightning, Onesiphorus fell to the ground, unconscious. When someone came into the church he found him and lifted him up off the floor; he gradually came to himself and related all that had happened. Everyone was astonished, and glorified God. 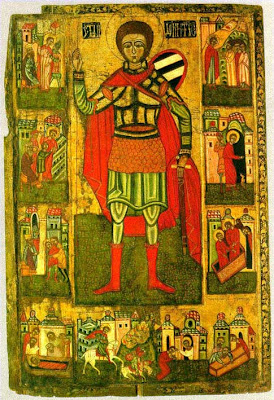 St. Paul bedewed Thessalonica with tears,
Demetrius watered it with his blood.
Demetrius, the commander,
Servant of the Creator and Lord.

The tears of the apostle and the blood of the martyr
Are the glory, salvation and pride of Thessalonica.
Demetrius, the commander,
Servant of the Creator and Lord.

Let us also glorify Christ's soldier,
The myrrh-gushing saint and courageous martyr.
Demetrius, the commander,
Servant of the Creator and Lord.