The Holy Canal of the Theotokos at Diveyevo Monastery 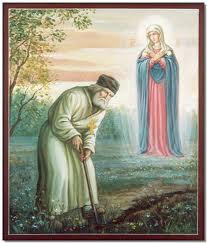 The Holy Trinity St. Seraphim-Diveyevo Convent was founded in 1760 when the Mother of God appeared to the nun Alexandra in a dream at the village of Diveyevo and promised to base a great and unrivaled convent there. In 1767 on that very spot where the Holy Virgin appeared, Sister Alexandra began to build the church dedicated to the Kazan Icon of the Mother of God. As Sister Alexandra drew closer to the end of her life, she asked the elders of Sarov not to leave her fellow sisters without spiritual guidance. It was Fr. Pakhomy who took it upon himself to look after the community of nuns and after his death the job was taken on by Saint Seraphim of Sarov.

As St. Seraphim was working in the convent one day, he saw the Mother of God walking around the boundaries of the monastery. He understood that this had been given not only as a sign of her protection, but that the very path she walked would be a blessing for those who followed in her steps. In 1830 Saint Seraphim had asked Diveyevo's nuns to dig the Holy Canal (or Holy Ditch), which would surround the elected place chosen by the Mother of God for the building of the Convent. Saint Seraphim said: "He who walks along the Holy Canal praying 'Theotokos and Virgin, Rejoice...' 150 times, for him this place will be Athos, Jerusalem, and Kiev." He and his nuns spent many months digging a deep canal of 2 meters along the Holy Virgin’s path. Through cold winters and snow they would dig this canal, and St. Seraphim would dig as if it was his final mission; in fact, he died on January 2, 1833 soon after its completion. The Elder would encourage pilgrims to walk the canal, and that if they did so, the Mother of God would unfailingly answer their prayers.

Since then Diveyevo Convent has been known as one of the four domains of the Theotokos. Saint Seraphim of Sarov predicted that Diveyevo would become a stronghold of Orthodoxy and a place where worldwide repentance would begin. St. Seraphim’s relics are now enshrined at the convent in Diveyevo, as the elder himself predicted a century and a half earlier. After the relics of St. Seraphim, the most widely visted spot at Diveyevo is the Holy Canal. In 1922 the Hieromartyr Seraphim Zvezdinsky saw the Theotokos walking along the Holy Canal. It is said that when the Antichrist comes, he will not be able to enter Diveyevo Monastery because of the Holy Canal. 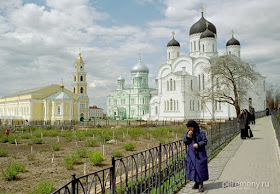 Every night after dinner, the Diveyevo nuns walk the canal in procession, carrying a cross and icons of the Mother of God and St. Seraphim, often with several hundred pilgrims in their wake.

"It had already grown dark when we, having left the church, made our way to the canal, which was sanctified, according to the words of St. Seraphim, by the steps of the Mother of God herself, and to which he attributed such special significance. Slowly the silent figures of the nuns were moving along the canal with prayer ropes in their hands, quietly whispering prayers: 'Blessed art thou amongst women, and blessed is the fruit of thy womb, for thou hast borne the Savior of our souls.'

The canal was actually a rather large embankment with a ditch on the outside, and on top of it ran a well-trodden pathway planted with large trees. The sides of the canal were overgrown with grass and field-flowers, which the believers pick and preserve as holy objects. We also walked along the canal with a prayer.

Inexpressible was the feeling of contrition of heart when we also touched this mystery so full of grace and were, so to speak, engulfed in the stream of human souls which for over 100 years ceaselessly continued, according to the commandment of St. Seraphim, to follow in the steps of the Queen of Heaven ... Several times we walked around the canal with prayer and did not want to leave, so light and joyful were we in soul. With the last breath of St. Seraphim this canal was finished, and it is destined in the future to be a defense against Antichrist himself. The whole meaning, the whole completion of this sacred mystery, of course, was open to St. Seraphim alone, but to us sinners it is given only to touch it, like the hem of a garment, and to wholly believe the words of the Saint that not a single stone in Diveyevo was laid without the instruction of the Queen of Heaven." (Source) 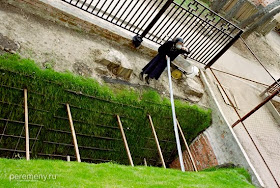 Since Dr. Timofievich’s time the canal has almost completely eroded and is no longer in its original form as an embankment, though it is being restored. Although it has been both purposely and naturally filled in, its path was not forgotten and thousands of contemporary pilgrims still trod the well-worn boundary walked by the Mother of God. Since the convent’s closure, the village has encroached on what was previously monastery property, and now the path winds past a school, near a power station and through the backyards and alleys of Diveyevo. Nevertheless, Dr. Timofievich’s experience of the canal walk is as true for pilgrims today as it was for him in 1926, and the nuns themselves recount the tradition that each day, unseen, the Mother of God visits her canal.

According to one pilgrim, Ann Johnson, who visited in 2006, this is how it now takes place:

"We were fortunate enough to join in the procession around the 'kanavka', which takes place every evening. St. Seraphim said that the Mother of God was the real abbess of Diveyevo, and that it was she who marked out the boundaries of the monastery which he caused to be built. He himself began the task of digging the ditch and dyke and the nuns continued it. When our friend Alison first visited Diveyevo about 10 years ago, she helped to dig it out along with many other pilgrims, so that the ancient tradition of praying around the kanavka every evening could be revived. A procession of nuns and priests lead the way walking slowly along the path in total silence, each person silently praying the prayer “Virgin Mother of God, Rejoice…” It took about 45 minutes to walk right round the kanavka, and the sky was darkening when we reached the end. We guessed that there might have been about one thousand pilgrims walking and praying in silence." (Source) 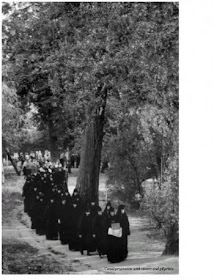 Below is a Russian documentary on the Holy Canal of the Theotokos at Diveyevo Monastery: