Bulgaria Govt Urged to Crack Down on Miracle Healers 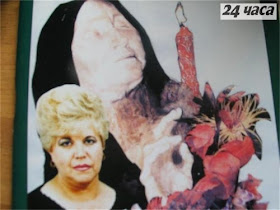 Fortune-teller and miracle healer Totka Totevska from the northern town of Pleven was sentenced last week to three and a half years in jail following complaints by clients. Totevska used to compare herself to world famous prophet Vanga who died in 1996.

Bulgaria's alternative medicine practitioners have threatened to approach the European Commission if the government delays plans to distinguish charlatanism from therapy and translate them into a law.

"Alternative medical therapy should be practiced only by people who have been educated in this field," representatives of the association told Darik radio.

"What we are fighting for is a legal framework, which will legalize the status of those healers, who have the necessary skills and training, and wipe out those who are just pretending to be healers, bringing nothing but problems to the people," says the association chair Zofia Shcherbak.

"When it comes to health care, the authorities' control is a must," she stresses and adds that Bulgaria's government is obliged to make sure that unconventional healing methods are in line with the European Union requirements.

But experts fear that the legislation wouldn't do much to put an end to the booming business of clairvoyants and miracle healers because too many Bulgarians believe in their services.

Numerous psychic programs of clairvoyants, soothsayers, fortune-tellers and astrologers with special powers have turned into a social phenomenon in Bulgaria.

The business of miracle healers is booming in Bulgaria as never before on the back of the economic crisis, Bulgarians' despair and their predilection for mysticism and superstitions.

These pushy women can be seen standing in front of hospitals, their ads feature in newspapers and on the internet. It is hard to avoid meeting them even in downtown Sofia.

More often than not, following these sessions, the patients end up with double-digit bills, rather than a solution to their problems.

The promise to solve virtually any problem whether it's regarding love, career, finance, stress or illness however have made the miracle healers so popular in Bulgaria that they successfully compete with the medics from the health care sector, left in tatters after the collapse of the communist regime.

According to social analysts the fear of the unknown, the feeling for being helpless when faced with corruption, the insecurity and instability that marked the period of big changes in the country, makes people seek refuge in superstitions.