John was born in 1785 in a place called Konitsa, which was populated by Albanian Muslims at the time. He was a Muslim of Muslim parents. His father was both a dervish and a sheik. When John was twenty years old, he also joined the order of dervishes, as there were a few tekes (Muslim dervish monasteries) in Konitsa. He moved to the city of Ioannina, Epirus, but later he moved to the town of Vrachori in the province of Aitolia, whose pasha was Haznatar Isufaravos, a friend of his father. So the pasha made John his private dervish, where he arose high in rank and fought in the battle of the Turks against the Russians in the area of the Ionian Islands.

During the battle John came into contact with many Orthodox Christians and decided to become an Orthodox Christian himself. He removed his dervish attire and sought baptism, yet no one would baptize him out of fear. The pasha eventually was transferred, but John did not go with him.

Because he was unable to be baptized in Vrachori, John went to the island of Ithaka where he was able to be baptized and at that time was given the name John. Returning to the mainland he married an Orthodox woman and became a rural guard, avoiding Muslims as much as possible.

His father eventually heard of his son's apostasy and sent two dervishes to persuade John to return to his Muslim faith. The messengers failed due to the steadfast faith of John. However news spread in the village that John was a former Muslim and dervish, causing the local Muslims to bring charges against him.
Soldiers were eventually sent by the muselimi of Vrachori to arrest John. When he was asked to identify himself, John replied: "I am an Orthodox Christian and my name is John."
The muselimi replied: "Aren't you the young dervish, the son of the sheik of Konitsa?"
"Yes I am," answered John, "but now I am an Orthodox Christian and I will die as an Orthodox Christian."
"You were deceived by your wife," countered the muselimi, "and changed your faith. But come to your senses now and make a confession of your old faith and then you will see how much you will be honored by me."

John dismissed what the muselimi said to him and said: "Don't think, muselimi, that I will be so foolish and dumb as to leave the holy faith of the Orthodox Christians and be blinded again to come to the faith of Islam."
For this confession John was sentenced to be beheaded. Before his decapitation John requested that his hands be untied. His request was honored, so he made the sign of the Cross and said: "Lord, remember me when You come into Your Kingdom." He then bent his head and it was cut off. This occurred near a tree of the Church of Saint Demetrios in Agrinio which still stands today.
The muselimi did not acknowledge John to be either a Muslim or a Christian, thus not allowing him to be buried in either faith's cemetery. His head and body were thus thrown into a stream near the Church of Saint Demetrios. Influential Christians bribed the aga who gave them permission to gather the body of the martyr to give him a proper burial. However the aga ordered them to give no formal service or ceremony for John, and the Christians promised to not do so and merely buried him in a field.
Thus John the former Muslim sacrificed his life for the love of Jesus Christ in Vrachori, Vellas, Epirus on September 23, in the year 1814. Many years later a child would hear voices coming from the tree trunk where the martyrdom took place, and this occurred daily until Priests came and did a Sanctification Service.
The holy skull and relics of Saint John were brought to the Holy Monastery of Prousou in Evrytania sometime between 1814 and 1821, by the priest Cyril Kastanophylle and placed in a secret place. The years passed and knowledge of his whereabouts had become forgotten. His relics were confirmed to be his on January 4, 1974 when the monks of the monastery opened the crypt allegedly belonging to him. As soon as the monks moved the stone of the crypt, and indescribable fragrance filled the room, and they glorified God. Inside they found a skull and relics belonging to an unknown Saint. After an investigation of the place, they found a tile on which was writtten: "ΙΣ ΧΣ ΝΙΚΑ (Jesus Christ Conquers). Here is the former Ottoman John, who was martyred on behalf of Christ at Vrachori on 1814 September 23." The finding of his sacred relics is celebrated annually on January 4th.

There is a small chapel dedicated to Saint John near the tree of his martyrdom where his feast is celebrated annually with a transfer of his relics for a few days. This chapel was established on 26 October 1983. 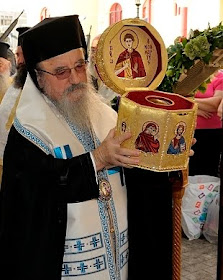 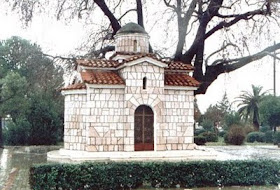