Miracles, Icons and Photos of St. Irene Chrysovalantou of Lykovrisi

The Life of Saint Irene Chrysovalantou from the Synaxarion:

Saint Irene, who was from Cappadocia, flourished in the ninth century. Because of her great beauty and virtue, she was brought to Constantinople as a prospective bride for the young Emperor Michael (842-867); however, as Saint Joannicius the Great foretold, it was God's will that she assume the monastic habit instead. She shone forth in great ascetical labours, and suffered many attacks from the demons; while yet a novice, she attained to the practice of Saint Arsenius the Great, of praying the whole night long with arms stretched out towards Heaven (see May 8). God showed forth great signs and wonders in her, and she became the Abbess of the Convent of Chrysovalantou. She was granted the gift of clairvoyance and knew the thoughts of all that came to her. She appeared in a vision to the king and rebuked him for unjustly imprisoning a nobleman who had been falsely accused. Through a sailor from Patmos to whom he had appeared, Saint John the Evangelist sent her fragrant and wondrous apples from Paradise. She reposed at the age of 103, still retaining the youthful beauty of her countenance. After her repose, marvelous healings beyond number have been wrought by her to the present day.

The following three miracles, of the hundreds regularly reported, come from the periodical published through Saint Irene Chrysovalantou Monastery in Lykovrisi, Athens. These are but a tiny portion of the reports that reveal the care and love and power of Saint Irene for those who call upon her with simple faith.

My name is Stamatia Zarbala and I live in Canada. In the past I was a subscriber of your magazine and I want to continue now. I have great love and respect for Saint Irene Chrysovalantou and I want to subscribe another five ladies as subscribers to your magazine thanking her for hearing my prayers.

One of these five ladies is very ill. For many years she suffered from serious illnesses and every so often she goes to the hospital for therapy. Her name is Athanasia Nidelkou. Saint Irene has helped her in the past.

Two years ago she had cancer of the knees. It had probably spread as she had cancer of the kidney, stomach, breast and her left hand. She had technical support on her heart twice a week and fluid was removed from her body. Her bones were deteriorating and her nails were falling off. There was not a place on her body where the doctors had not injected therapies which they did daily.

On Holy Thursday in the afternoon the great miracle was worked as will be explained. As usual the doctors were removing the fluid from her body. The door was closed as no one was allowed in.

Suddenly while the doctors were in the ward a priest came dressed in white. Nobody could make him out from the rays of light shining from his face which looked like sun rays. A Jewish doctor who was now a Christian for a long time asked him who he was and what he wanted as visitors were not allowed.

The priest answered in Hebrew that he was Father Christos and he had come to give Holy Communion to the patient Athanasia, He then turned to the other doctor and spoke to him in English to stop the treatment as it was enough for the day and to press well the place where he would remove the drip as he was giving Holy Communion and it was not allowed to lose blood.

He then spoke to Athanasia in Greek. He introduced himself as Father Christos and that he had come to offer Holy Communion. He had brought with him the Holy Chalice. He gave her Holy Communion and then wiped her with the Holy Cover of the Chalice which had on it an embroidered silver cross. He then gave her some Holy Bread and asked her: "What do you want now my child?"

Athanasia answered: "Father, pray to Christ to give me again the use of my legs so that I can walk."

Immediately he gave her his hand and said: "Come my child, get up and walk."

The doctors, who were afraid, said in one voice that she could not walk, as they were afraid she would fall. He assured them that she would not fall, and on leaving her hand he disappeared, leaving behind an icon of Christ. From that moment she walked as before with no difficulty. She still had the other problems though.

Glorious be God's holy Name, who through the intercessions of the Holy Virgin and His Saints takes pity on us. Athanasia is really a Christian as I have never heard her complain in spite of all her problems. What I often hear her say is: "Thank God. It's His will. There is worse around."

Many times I have asked myself how much worse there can be. God forgive me and have pity on me. I have known Athanasia for thirty-four whole years and she is always ill with something. The worst of all is that six years ago her husband died and he left her alone not having even the necessary money for a funeral. She is totally alone with no relatives and I feel very sorry for her. Please pray for her not to lose courage and for God to relieve her from her pains which are terrible. Her faith is great and strong until now. I hope it will remain like this until the end with God not allowing it to weaken and to reward her in heaven, which she deserves.

I will always thank Almighty God for the miracles which He works for us and generously takes pity on us.

I thank you, Saint Irene Chrysovalantou, for your kindness towards us. Our little girl had burned herself to a great degree and the doctors had not given us much encouragement, telling us that her recovery would take long.

With your help and your Holy Oil from your Holy Lambada which I smeared on her day and night, our little girl after two months was completely well.

The doctors could not believe it. Saint Irene Chrysovalantou, we thank you and ask that you will always be near us and protect us.

With great faith I thank you from deep in my heart, Saint Irene Chrysovalantou, for the miracle which you also worked for us.

For eighteen months I had a problem with my kidney. I went from doctor to doctor and there was no therapy until they decided to remove the kidney. When my mother heard this, she cried and prayed to Saint Irene Chrysovalantou to cure me.

The next day I came to your Monastery with my brother-in-law at Lykovrisi and I prayed with all my heart. That night my mother dreamed of you and you told her not to worry as you would help me get better. After two days I was well and I did not feel any pain in my kidneys. After three months I dreamed that you gave me two children and you asked me to name one of the children after you. That is what happened.

With great faith and thousands of thanks I prayed before your miraculous icon thanking you for your double miracle. You first gave me my health and secondly my two children, bringing happiness to my home. I will pray to you and tell of your miracles forever.

Advice On Naming Your Child After Saint Irene Chrysovalantou

As in the last miracle above, it is customary that when Saint Irene helps a childless couple bear a child through her miraculous intervention, to name the child after Saint Irene. However, because the primary feast day for those named Irene falls on May 5th when Saint Irene the Great Martyr is celebrated, it is necessary to distinguish between the two. For this reason, it is customary to name boys Chrysovalantis and to name girls Chrysovalantou. The double name of Irene Chrysovalantou should not be given, since this alone belongs to the Saint. It is for this reason in the Orthodox Church that we do not name our children, for example, as John the Forerunner, John Chrysostom, Mary Magdalene, John the Theologian, John of Damascus, and many others. Rather, according to custom, out of reverence we only give the second name if the primary name is occupied by another Saint. This is why for those who want as their patron John Chrysostom, the name of Chrysostomos is given; for those who want Mary Magdalene, the name Magdalene is given; for John the Theologian, the name Theologos is given, etc. I believe this will help parents name their children accurately according to Orthodox custom when they want to offer their children to particular Saints.

The Miraculous Icon of Saint Irene Chrysovalantou in Lykovrisi, Attica

A Tour of St. Irene Chrysovalantou Monastery in Lykovrisi

The Hand of St. Irene Chrysovalantou in Astoria, NY

Apolytikion in the Plagal of the First Tone
Not a temporal kingdom on earth didst thou obtain, but Christ, thy most comely Bridegroom, vouchsafed thee heavenly crowns, and thou reignest as a queen with Him eternally; for thou didst dedicate thyself unto Him with all thy soul, O Irene, our righteous Mother, thou boast of Chrysovalantou, and mighty help of all the Orthodox.

Kontakion in the Third Tone
Leaving all the world behind with its impermanent glory, thou wast wedded unto Christ, the King immortal and holy, bringing Him as precious dowry thy maiden beauty and thy trophies won through abstinence over demons. O Irene, our righteous Mother, entreat thy Bridegroom to show His mercy to us. 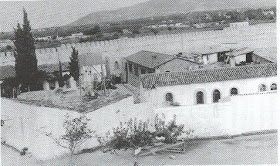 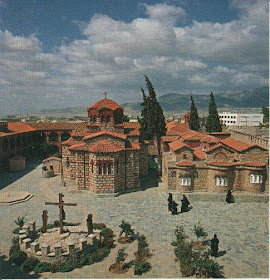 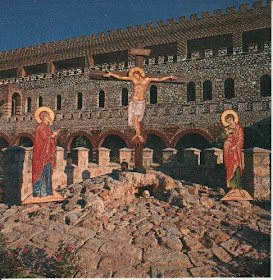 The Crucifixion Scene on Golgotha 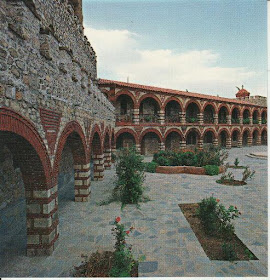 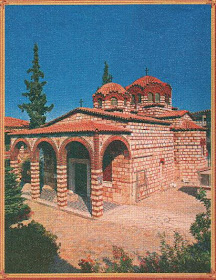 The miraculous icon of Saint Irene with its many tokens showing its miraculous power.

The icon without the jewelery.

2007 procession of the feast day of Saint Irene.

St. John the Theologian giving the miraculous apples to the sailor.

Saint Irene distributing the apple slices to her nuns.

Sketch of Saint Irene from 1957 by Metropolitan Gabriel, co-founder of the Monastery.

Sketch of Saint John the Theologian from 1957 by Metropolitan Gabriel, co-founder of the Monastery. 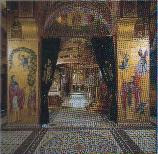 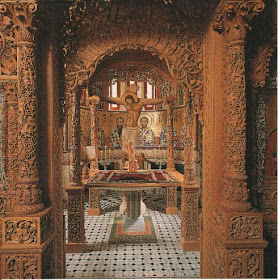 Holy Altar of the Katholikon 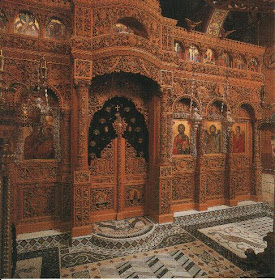 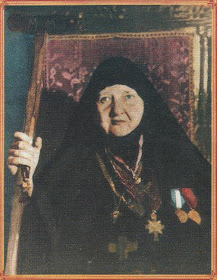 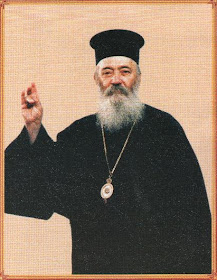 Metropolitan Gabriel of the Cyclades Islands (+1998), co-founder of the Monastery 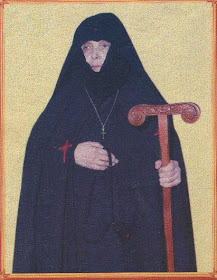